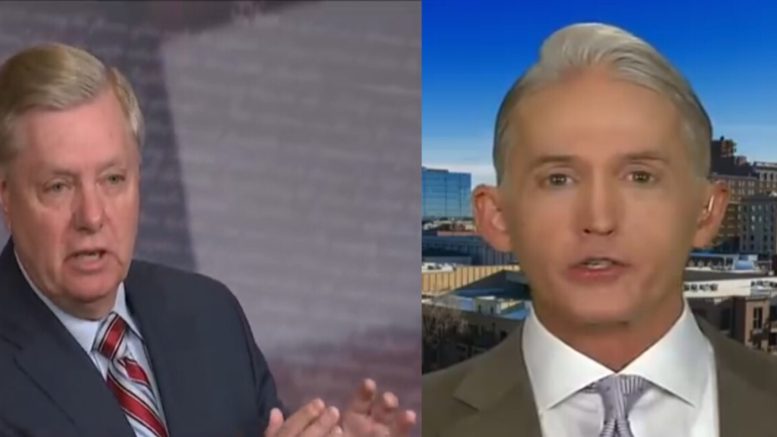 Now that the witch hunt is over, Graham said he plans to get answers about how the Russia probe was started and whether it was used as an excuse to spy on Trump’s presidential campaign. He called on Attorney General William Barr to appoint a special counsel to examine the issue.

Sen. Graham during the conference, blasted the FBI for their abuse and shady behavior. He also said he will look into the handling of the probe into Hillary Clinton’s use of a private email server as secretary of state, the Tarmac meeting with Bill Clinton and former AG Loretta Lynch, along with FISA abuse. “The FISA warrant issued against Carter Page based on a dossier prepared by Christopher Steele is at a minimum disturbing.” He added of the corruption, “those days are over.”

He pointed out that he’s been calling since late 2017 for a special counsel to look into whether a FISA warrant was abused for political purposes and whether a counterintelligence investigation was opened up as a back door to spy on Trump’s presidential campaign in 2016.

Former Chairman of the House Oversight Committee, Trey Gowdy weighed in on Fox News after Sen. Graham laid out his plan to get to the bottom of things.

“Lindsey is right. There are some House Republicans that have been looking for the past 12 months at the FISA process, the origination of the FBI investigation in July of 2016.” (Video Below)

Gowdy went to say “we were ridiculed by our Democrat colleagues, and quite frankly, by most people in the media for daring to ask how Jim Comey could’ve possibly cleared Hillary Clinton before she was interviewed. Democrats didn’t want any part of that.”

He praised Sen. Graham for his efforts. “He’s exactly right. The lady wears a blindfold. She’s not a Republican, she’s not a Democrat. As an American, you should want a Department of Justice and an FBI that you can have confidence in.”

Gowdy also pushed back at the fake news media and explained why many of his fellow citizens have so little confidence in them after two years and finding no evidence of conspiracy or coordination. (Video Below)

The first three questions Sen. Graham took from the press were about “obstruction of justice.”

Gowdy declared, “They weren’t about the origin of the investigation! Nothing about the past two years, 25 million dollars, 500 witness interviews– no media inquiries about that.”

This tells you exactly where Democrats and the media will continue their focus: “get rid of Trump.”

(Related: Reporter Suggests There’s A Conflict Of Interest With Trump, Graham Fires Back: ‘You’ve Got To Be Kidding’)