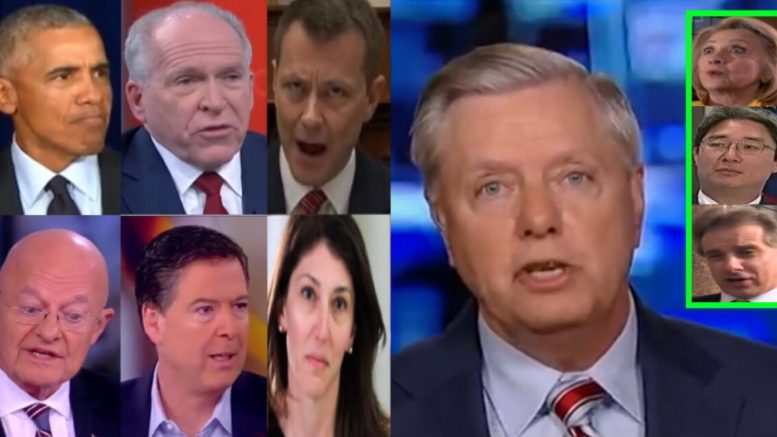 Senate Judiciary Chairman, Lindsey Graham (R-SC) joined host Sean Hannity on Fox News Monday where he weighed in on the aftermath of the Mueller report.

This comes after Graham earlier in the day, held a news conference and announced that he plans to get answers about how the Russia probe was started and whether it was used as an excuse to spy on Trump’s presidential campaign. He called on Attorney General William Barr to appoint a special counsel to examine the issue.

While speaking with Hannity, Sen. Graham said laid out what he wants to know and his next plans to get to the bottom of things.

(Related: Reporter Suggests There’s A Conflict Of Interest With Trump, Graham Fires Back: ‘You’ve Got To Be Kidding’)

“Here’s what I want to find out: did they exonerate Clinton because they had a political bias? Did they ignore all the facts because if they indict her they know she can’t beat Trump, and they wanted Trump to lose. Was the counterintelligence investigation a back door way of spying on Trump? There’s no real evidence of working with Russia, they just used it as an excuse. Was the FISA obtained unlawfully based on fraudulent documentation to surveil the campaign?” Graham asked.

He further inquired, “First thing I want to do is find out why they got a warrant against Carter Page if the dossier was a bunch of garbage. What did you have beyond the dossier? Why didn’t you listen to Bruce Ohr? At the end of the day, how could you use this document, that’s unverified to this day to get a warrant on four different occasions?” (Video Below)

Graham also wondered why they didn’t warn Trump if they knew the Russians were trying to infiltrate his campaign.

Hannity said that Graham now has the ability to make public the FISA warrants, the 302’s, the gang of eight information, and the five buckets. “How important is it that the American people see that, beside the Mueller conclusions?” He asked of Graham. (Video Below)

“Now it’s time to look at how this got off the rails. So what am I going to do? I’m going to use every tool available to me, disclose as much as I can without compromising source and methods to make sure the public understands how their President could be accused of working with a foreign government, when there is no real basis and fact.” Sen. Graham said.

“Did the investigators, did the prosecutors use the law for political purposes? If that turns out to be true, that is bigger than Watergate. Did they try to take him down after he got elected? Was there a real effort to try and invoke the 25th amendment?” He asked.

“Nobody seems to give a damn, expect me, you, and a few other people. If it had been Republicans hiring Steele to spy on Clinton and they used a dossier to prepared by Steele against Clinton associates– that was a bunch of political garbage, it would be front page news everywhere!” Graham declared.

Hannity noted that Graham’s pledge to America is “so important” to getting to the truth so this never happens again. (Video Below)

(Related: Graham Gives His Theory On Why Obama’s DOJ May Have ‘Short-Circuited’ Hillary’s Email Probe)