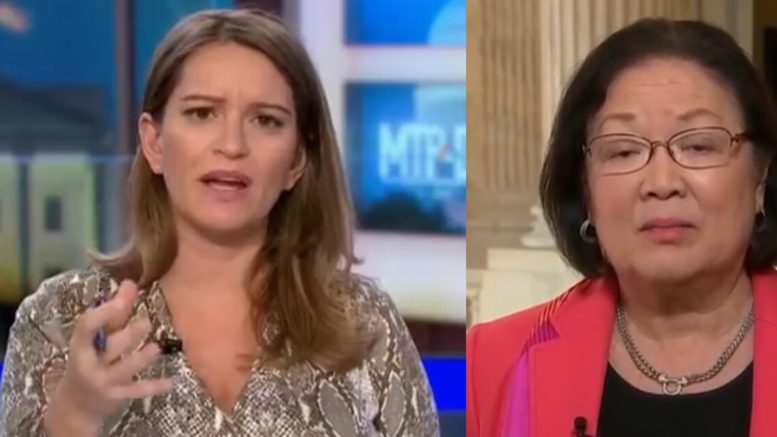 House Majority Leader Mitch McConnell (R-KY) said before the vote took place that it would be an opportunity for Americans to see how their Senators stood on the climate bill, which he labeled as a “destructive socialist daydream.”

McConnell foiled Democrats’ plot to vote “present” as a way for them to dodge showing their true stance on the Green New Deal. He said voting “present” equates to voting “no” on the plan.

After the vote, Sen. Mazie Hirono (D-HI) interviewed on MSNBC with host Katy Tur where she called out Hirono for “trying to have it both ways” on the Green New Deal after she and other Democrats voted present on the resolution.

Asked why so many Democrats voted “present” on the deal instead of voting “yes”, Hirono replied, “Because, this was just a sham, so-called debate by Mitch McConnell. He wanted to divide the Democrats.” (Video Below)

Hirono went on to say, “The bottom line is the Green New Deal is an aspirational document that says ‘we recognize the science behind climate change’, unlike Trump and the Republicans and all of the climate deniers who want to stick their heads in the sand and make believe that climate change is not happening.”

Katy Tur seemed confused and fired back at Hirono’s nonsense. She asked, “But isn’t that an argument you just made to vote ‘yes’ for it? McConnell may be trying to make it a ‘show-vote’, but if you signed onto this, you’re one of the co-authors of it. If you believe this is something– even if it’s aspirational that needs to get done, why not take a stand and vote ‘yes’ for it?”

Tur added, “And here’s where the Democrats stand for– we don’t care that it’s a ‘show-vote’ from leader McConnell. It seems like you’re trying to have it both ways. Not be hung by it politically, but also not say you don’t support it.” (Video Below)

MSNBC isn’t supposed to ask tough questions of their Democratic pals so it left Hirono a little flustered. Nonetheless, Hirono responded, but she didn’t stand by her core beliefs. Instead, she placed the blame on Sen. McConnell, rather than admitting that the Green New Deal is an embarrassment.

“I disagree with you Katy. Why should we engage in the type of sham shenanigans that Mitch McConnell is really good at? He’s going to keep doing these kinds of things. His goal in life is to divide the Democrats.” Hirono said.

She added, “I am not going to be a fool to Mitch McConnell’s shenanigans. Why should any of us?” (Video Below)