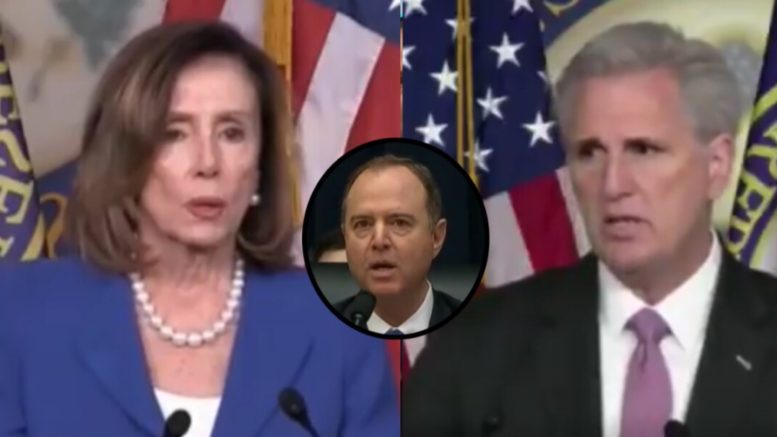 This comes after demands from several Republicans and the President equally calling for Schiff’s resignation.

Rep. Adam Schiff has consistently accused President Trump of collusion, along with several other Democratic lawmakers. But, Schiff remains to be the “tin-foil hat ring leader” as he peddles his lies on fake news conspiracy networks– giving the hate-Trump media mob fuel for their fire to attack the President.

Special Counsel Robert Mueller’s conclusion turned up no evidence of collusion between Trump campaign members and Russia during the 2016 presidential election, yet Schiff is still peddling his Russia collusion claims.

Leader McCarthy is fed up and called on Speaker Pelosi Thursday, to remove Schiff. (Video Below)

In his press conference, McCarthy firmly stated, “All Americans should be concerned with the chairman of the House Intelligence Committee taking the position of judge and jury and perpetuating false information to the American people for the last two years.”

McCarthy explained that Republican lawmakers signed a letter on Thursday to inform Schiff that they have lost confidence in him. “They do not believe that no matter what they work on, that the public can trust him.” He said.

Further, he noted that one person alone decides who sits in that position as a Chairman for the Democrat side, and one person decides on the Republican side, which is McCarthy. (Video Below)

“We need to restore the trust in the Intelligence Committee. The idea that you would have a chairman of a committee of this nature– the work that is involved in this committee– that would lie to the American public, not apologize, but use the tactics of Senator Joe McCarthy to attack his own members.” He said.

McCarthy doubled down and expressed, “There is nothing that could come from this committee that can be trusted. It is time to turn the page. The Democrats have wasted their majority. They allow a person who lies to us to be a head of an Intel committee.”

As he listed off the several agents, attorneys, subpoenas and witnesses with Mueller’s investigation, he frankly asked, “Does America truly believe or does Adam Schiff truly believe– he knows something more than Mueller?”

“He needs to resign from the committee.” Leader McCarthy reiterated firmly. [Emphasized.] (Video Below)

.@GOPLeader McCarthy calls on @RepAdamSchiff to resign from Chair of @HouseIntel: “It's now up to Nancy Pelosi to remove Chairman Schiff… there is nothing that could come from this committee that can be trusted.” pic.twitter.com/eQILzvZMBr