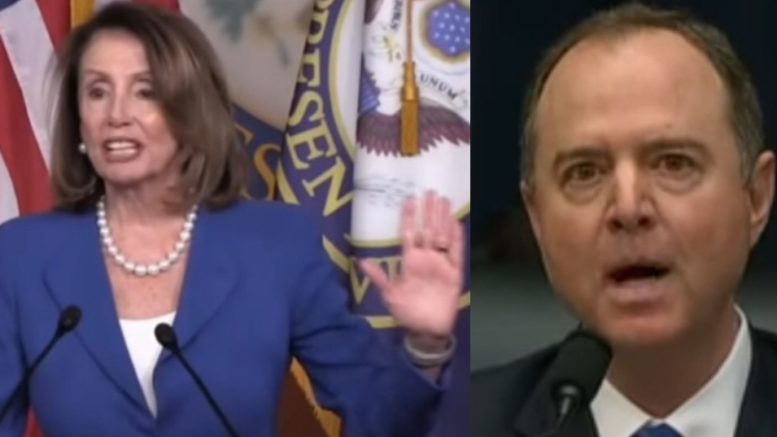 Republicans on the House Intelligence Committee demanded Rep. Adam Schiff (D-CA) to step down as chairman over his repeated claims to have evidence of Trump-Russia collusion.

Further, President Trump weighed in on Twitter with the same sentiment and wants him to resign.

“Your actions both past and present are incompatible with your duty as Chairman of this Committee. We have no faith in your ability to discharge your duties in a manner consistent with your Constitutional responsibility and urge your immediate resignation as Chairman of this Committee.” The letter in part, read from lawmakers. Nine committee members signed off on it.

President Trump called into Fox News Wednesday night where he spoke to Sean Hannity. The President said Schiff is a “bad guy”, because he knew he was lying [to the public] about “Russia collusion.” Trump also suggested that Schiff would leak, and call CNN. “He should be forced out of office; he is a disgrace to our country.” He said bluntly. (Videos Below)

The President also tweeted Thursday morning, “Congressman Adam Schiff, who spent two years knowingly and unlawfully lying and leaking, should be forced to resign from Congress!”

However, Speaker Nancy Pelosi is scared shiftless and protecting her ilk as she stood by Rep. Schiff following calls for his resignation.

During a press conference on Thursday, Pelosi told reporters, “I’m so proud of the work of Chairman Adam Schiff.” (Videos Below)

Clearly, Pelosi has lost her mind as Schiff had a meltdown during a fiery hearing on Thursday morning. Pelosi will protect Schiff so that the Democrats have someone doing their dirty work and digging up dirt for the 2020 campaign. She literally said she is “proud of his work.” Is she referring to his spreading of lies and propaganda? That work, Pelosi?

Adam Schiff is a snake and the biggest fraud on Capitol Hill. He is doing the Democrats’ dirty work  to cover up their corruption and crimes. Take it to the bank, that is exactly what is going on. He is being used as her puppet.

Watch the two short clips below. The first one is President Trump speaking with Sean Hannity about about Schiff. The second is Pelosi covering for “Little Adam.”

Related: Republican Congressman Explains To Schiff In Detail Why He Should Resign: ‘You Are Advancing Putin’s Work’)