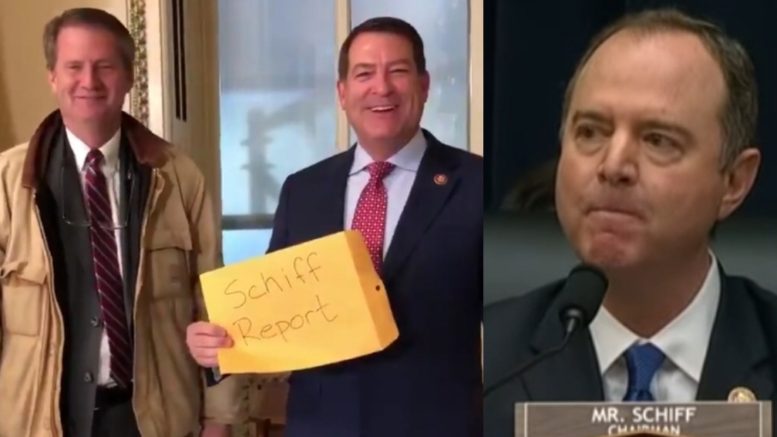 They took to Twitter on Thursday mocking Chairman Adam Schiff (D-CA) in a classic skit for the ages.

The biggest liar, leaker, and conspiracy theorist on Capitol Hill is in the hot seat after calls for Adam Schiff’s resignation is heating up. But, he has become the laughing stock across the country and he is still claiming there is “Russian collusion.”

Lawmakers slammed Adam Schiff Thursday morning in person, during a fiery hearing, for his claims in the media that there was “more than circumstantial evidence” of collusion between the Trump campaign and Russia. Further, nine committee members signed off on a letter for his resignation.

President Trump said on Twitter Thursday morning, “Congressman Adam Schiff, who spent two years knowingly and unlawfully lying and leaking, should be forced to resign from Congress!” (Video Below)

Congressmen Mark Green and Tim Burchett wrote on Twitter, “BREAKING: @RepTimBurchett and I found the elusive Schiff Report that allegedly proves the president colluded with Russia!”

Burchett pulled out a manila envelope from his jacket and said to Green, “I have the ‘Schiff report.”

Green responded in delight, “You have the report? Holy cow, he has the ‘Schiff Report!'” (Video Below)

The Congressman were excited to open the envelope and reveal the findings. Rep. Green stuck his hand in, then shook the envelope upside down, but nothing fell out.

“There’s nothing here! There’s no proof,” They said smiling and laughing.

BREAKING: @RepTimBurchett and I found the elusive Schiff Report that allegedly proves the president colluded with Russia! pic.twitter.com/cAvNniVWcV