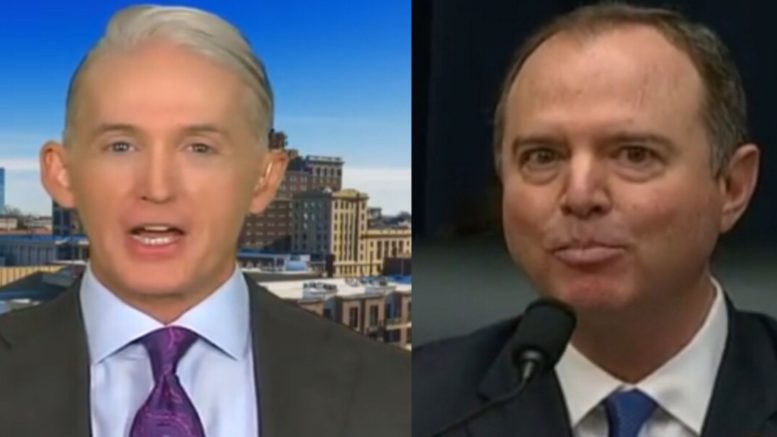 Former Republican South Carolina Congressman, Trey Gowdy, joined host Dana Perino Friday on Fox News’ “The Daily Briefing”, where he weighed in after Republicans on the House Intelligence Committee demanded that Rep. Adam Schiff (D-CA) step down as chairman over his repeated claims to have evidence of Trump-Russia collusion.

Lawmakers slammed Adam Schiff Thursday morning in a letter for his claims in the media that there was “more than circumstantial evidence” of collusion between the Trump campaign and Russia. They repeated their demand in person during a fiery hearing.

“Your actions both past and present are incompatible with your duty as Chairman of this Committee. We have no faith in your ability to discharge your duties in a manner consistent with your Constitutional responsibility and urge your immediate resignation as Chairman of this Committee.” A letter, in part read, written from the Republican lawmakers. Nine committee members signed off on it.

The letter comes after Special Counsel Robert Mueller’s conclusion turned up no evidence of collusion between Trump campaign members and Russia during the 2016 presidential election.

Trey Gowdy responded to the Republicans’ calls for Schiff to resign and pointed out that it’s hard first of all, to get onto the House Intelligence Committee. (Video Below)

He also said that the members on the committee are experienced in national security, further adding, “These are not members of the bomb throwing caucus, and for them to say, ‘Adam Schiff, we have lost confidence in your leadership’….”

Gowdy continued, “I’ll tell you what I think is going to happen next Dana: the intelligence community is going to say ‘you know what Adam? You disregard the information that you’re provided, you prejudge the outcome of investigations, you have the President not just indicted, but in jail, we’re gonna stop sharing information with you.'”

He added, “If you are the Chairman of the House Intelligence Committee and you can’t act in a reasonable way, we’re going to stop sharing information with you, in which case, Pelosi will have no choice but to replace Schiff.” (Video Below)

He noted the next in line is Jim Himes (D-CT), who is every bit progressive, but a lot more reasonable than Adam Schiff.

WATCH: Schiff comments start at 2:00 minutes into the video.