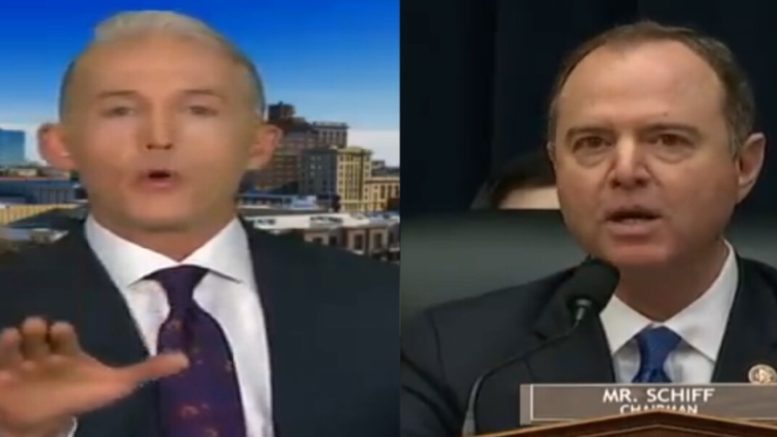 This comes after Schiff refuses to accept the outcome of Robert Mueller’s report and still peddling Russian collusion conspiracies.

Last week, Special Counsel Robert Mueller released his report to Attorney General, William Barr. According to Barr’s summary, Robert Mueller “did not find that the Trump campaign, or anyone associated with it, conspired or coordinated with the Russian government.”

Meanwhile, lawmakers slammed Adam Schiff Thursday morning for his claims in the media that there was “more than circumstantial evidence” of collusion between the Trump campaign and Russia. They repeated their demand in person during a fiery hearing.

“Your actions both past and present are incompatible with your duty as Chairman of this Committee. We have no faith in your ability to discharge your duties in a manner consistent with your Constitutional responsibility and urge your immediate resignation as Chairman of this Committee.” A letter, in part read, written from the Republican lawmakers. Nine committee members signed off on it. (Video Below)

Gowdy responded to the calls for Schiff to resign and began by saying that the “process is unprecedented.”

Gowdy continued, “Remember in the Barr letter, the summary that Barr sent, despite multiple opportunities… no evidence of collusion between the Trump campaign and Russia. And yet, Fusion GPS and the Clinton campaign, was actually spending money to dig up Russian dirt on Trump.” (Video Below)

Gowdy said that Adam Schiff never addressed the fact that the Clinton campaign and the DNC spent money to dig up dirt on then-candidate Donald Trump. (Related: Jordan Cranks Up The Heat, Suggests Pelosi Take Action Amid Schiff’s Hidden Ties With Simpson)

“I’ve heard him talk about the Trump Tower meeting where nothing happened. In fact, [Schiff] went to court to keep us from finding out about Fusion GPS. So, I think he’d be taken a little more seriously if ever once in a while he acknowledged the only campaign that took information from Russia, was the campaign he supported.” He said.

Democrats have been “trying to rush” Attorney General Barr as they have demanded him to “release the report, now.”

“I’m in a really small group of people who actually doesn’t think the report should be made public, because the Department of Justice is a true-false agency. You either indict or you do no indict. But, you don’t do oppo-research and then turn it over to someone like Adam Schiff– which is all he wants. He just wants any Kernel of negative information about President Trump, so he can use it in 2020.” He announced. (Video Below)