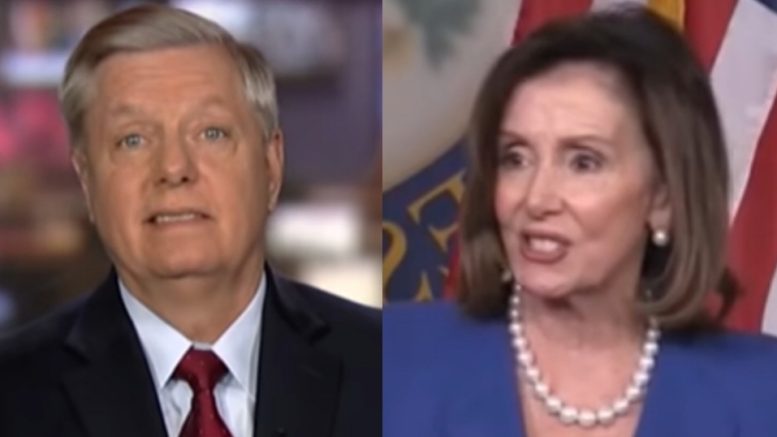 Sen. Lindsey Graham (R-SC) joined host Neil Cavuto on Fox News Thursday where he weighed in on Speaker Pelosi’s recent remarks she made during a press conference on Thursday.

This comes after Special Counsel Robert Mueller released his report to Attorney General, William Barr. According to Barr’s summary, Robert Mueller “did not find that the Trump campaign, or anyone associated with it, conspired or coordinated with the Russian government.”

Democrats, however, have not accepted that the Russia hoax is finally dead, or the fact that the collusion-delusion is over!

(Related: In A Jam-Packed MI Rally Speech, Pres Trump Seals The Deal On The ‘Russia Hoax’ For Good)

With that behind said, Speaker Pelosi said during her press conference of AG Barr on Thursday, “I have said and I’ll say again:  ‘No thank you, Mr. Attorney General, we do not need your interpretation.  Show us the report, and we can draw our own conclusions.  We don’t need you interpreting for us.’  It was condescending, it was arrogant, and it wasn’t the right thing to do.  So the sooner they can give us the information, the sooner we can all make a judgment about it.”

Graham responded and ripped Pelosi, “I think that was really beneath the Speaker.” (Video Below)

He asked, “Do you really believe Bob Barr would give us a summary of the key findings and it not be supported by the report? Give me a break!”

“This whole Oliver Stone approach to the Mueller report by Democrats is getting a bit old.” He expressed.

Graham explained that Attorney General, William Barr, is combing through the report, starting with taking out Grand Jury information because it is required by law. He will also talk with the intelligence community and make sure there isn’t anything in the report that would hurt national security. After that, he will give it to Congress and the Senate, then, he will testify. (Video Below)

Asked about former FBI Director James Comey commenting on “obstruction of justice”, the South Carolina Senator said “We will have Comey come in and tell us everything: the FISA warrant and the Bruce Ohr interview with Steele, about their counterintelligence operation. I promise you, Mr. Comey will come before the committee in a public setting and he’ll be asked some questions about the dossier and everything else.”

He also doubled down on a second Special Counsel. “Republicans believe that the FBI and DOJ took the law in their own hands because they wanted Clinton to win and Trump to lose. There’s a lot of suspicious, and a lot of evidence of direct bias. Lets have somebody like a Mueller to look at the other side of the story. But, I’ll leave that up to Mr. Barr. I trust his judgement.” He explained.

Cavuto asked Graham about Republicans urging Rep. Adam Schiff (D-CA) to step down while Speaker Pelosi remains protecting him, Graham said, “Mueller was given the ability to complete his job without political interference.”

“Congressman Schiff is really becoming an Oliver Stone of the House. He’s the Jim Garrison figure trying to look for somebody who actually shot President Kennedy. This is getting to be a bit ridiculous. He told us time and time again he knows there’s collusion, he’s seen evidence of it. Well, Mr. Mueller undercut that narrative. So Adam Schiff’s got to make a decision about his political future. Does he want to be the guy that won’t let it go when the authority of the investigation, Mr. Mueller, has concluded there was no collusion?” Graham wondered. (Video Below)