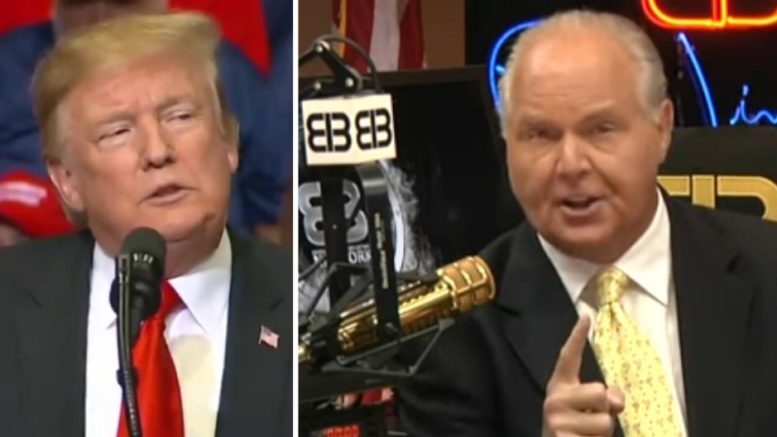 Talk radio titan, Rush Limbaugh, called on President Trump to appoint a special counsel to investigate the origins of the Mueller report in an interview on Fox News’ “Special Report” with host, Bret Baier. Limbaugh said the American people deserve to know how they have been manipulated.

Limbaugh went into further detail and laid out a three step plan the President must act upon now that the Mueller probe is over.

Fox News reported, in a four-page letter to the leaders of the House and Senate Judiciary committees, Attorney General William Barr wrote that Mueller, a former FBI director, “did not find that the Trump campaign, or anyone associated with it, conspired or coordinated with the Russian government” or Russia-linked organizations in either “disinformation and social media operations” or “computer hacking operations designed to gather and disseminate information to influence the [2016] election.”

Democrats have been in an uproar since, and have not accept Barr’s summary– calling for the full release of Mueller’s report, now.

Asked what his assessment is of the fallout after the release of the report, Rush said, “I think all the fallout is a bunch of distraction. We got to keep track of exactly what this was, Brett. There was zero collusion. There was never any evidence of any collusion between Trump or his campaign and Russia. Zilch. Zero. Nada.”

“They began an investigation based on a phony dossier that was created and written by associates of Hillary Clinton. It was opposition research. This is outrageous what has happened here. There needs to be investigation into this. There needs to be accountability for everybody who participated in this — from people high up in the Obama administration, all the way down and including most of the mainstream media.” He said. (Video Below)

Rush continued, “It has been two years we have been distracted. This country has gone through hell here! The people of this country were told their President was a traitor! They were assured their president had colluded, had stolen the election. None of it happened.”

He announced that the Special Counsel has known there was no collusion since before the investigation began. “This whole thing is a manufactured coup, because these people could not accept the results of the 2016 and they’re continuing it, Brett.” (Video Below)

“I hope the president calls a special counsel to look into this, because the American people deserve to know how they have been manipulated, how they have been used. They deserve to know what the Democrat party and the American left– descending from the Obama administration attempted to pull off here. And it better never ever, ever happen again. This is probably the biggest political scandal, certainly in our lifetimes and maybe even longer.” Rush announced.

Rush laid out a three step plan the President must act upon now that the Mueller probe is over: declassify, close the border and pardon everybody.

Rush also wondered where are the FISA judges. “A phony opposition research document called a dossier was used four times. There’s not a shred of evidence in it, none of it has been corroborated, and they used it to get warrants to spy on the opposing presidential campaign, four different times!” He declared. [Emphasized] (Video Below)