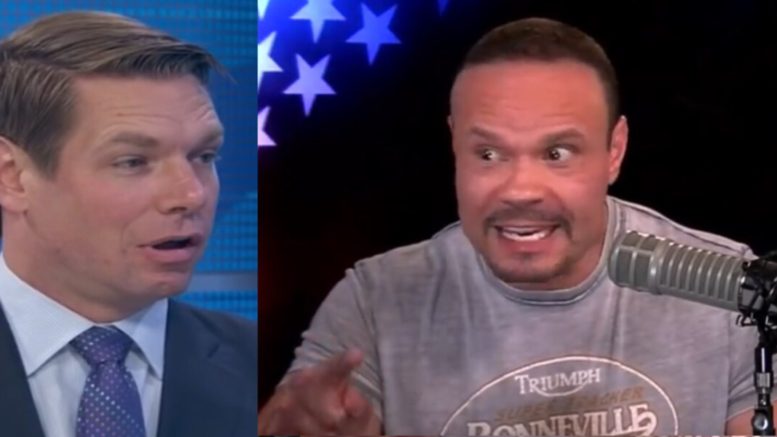 Unless you’ve been living under a rock, you know by now that two of the biggest “Russia collusion peddlers” in Congress are Reps. Adam Schiff (D-CA) and Eric Swalwell (D-CA).

Despite Robert Mueller concluding he “did not find that the Trump campaign, or anyone associated with it, conspired or coordinated with the Russian government,” the two Congressman continue to push their conspiracies to anyone who will listen or perhaps, refuse to remove their tin-foil hats.

Former Secret Service agent and Fox News contributor, Dan Bongino, took note of Eric Swalwell’s latest cry to keep the conspiracies alive and called him out as he refuses to acknowledge or admit the FBI and DOJ’s effort to take down President Trump.

(Related: AG Barr Issues A New Letter With More Insight Of Mueller’s Report, Trump Responds: ‘I Have Nothing To Hide’)

“Everyone will soon be able to read it on their own,” Barr said in his letter. “I do not believe it would be in the public’s interest for me to attempt to summarize the full report or to release it in serial or piecemeal fashion.” (Continued Below)

Barr’s new letter provided more insight regarding what details of Mueller’s report will be redacted and kept out of the public’s view. Mueller is assisting the agency in this process, Barr said.

Washington Examiner reported that Barr identified four categories of information that will not be made public, including material related to grand jury proceedings which by law cannot be made public, information deemed by the intelligence community to compromise sensitive sources and methods, details that could affect other ongoing investigations — including those referred by the special counsel’s office to other offices — and material that would “unduly infringe on the personal privacy and reputational interests of peripheral third parties.”

Of course, Swalwell took to Twitter to rally up the “Never-Trumpers” and tin-foil hat wearers after Barr explained there will be redactions because of sensitive information that cannot be exposed. (Continued Below)

Swalwell wrote, “If you paid for a book, but the cashier only handed you a summary of the story instead, wouldn’t you demand to get the full book? You paid for the Mueller report. Demand you get the full report.”

Bongino fired back at Swalwell with a question of his own then put him directly in his place.

He asked, “If you paid for political opposition research, but a foreign spy handed you a dossier of Russian disinformation instead, wouldn’t you demand a full FBI investigation into this enormous scandal?”

Then, he went in for the jugular next and announced, “Eric Swalwell is a disgraceful human being who embarrasses himself, and the US Congress, on an hourly basis. He’s everything wrong with this country, the swamp, and the confused liberals and media-types who take him seriously.” (Continued Below)

If you paid for political opposition research, but a foreign spy handed you a dossier of Russian disinformation instead, wouldn’t you demand a full FBI investigation into this enormous scandal? https://t.co/pZQp23pM8V

Eric Swalwell is a disgraceful human being who embarrasses himself, and the US Congress, on an hourly basis. He’s everything wrong with this country, the swamp, and the confused liberals and media-types who take him seriously.

We leave you with a few responses we thought were funny directed at Swalwell:

Multiple sources confirm Eric Swalwell is in the running for the Dumbest Person in Congress, in a neck and neck tie with AOC. Story Developing.

You can completely summarize a book within a couple of paragraphs if you are half intelligent. Remember book reports? The full report will be out soon, but in the mean time it's amusing to listen to you libs moan about it. You are on the losing side of collusion, deal with it.