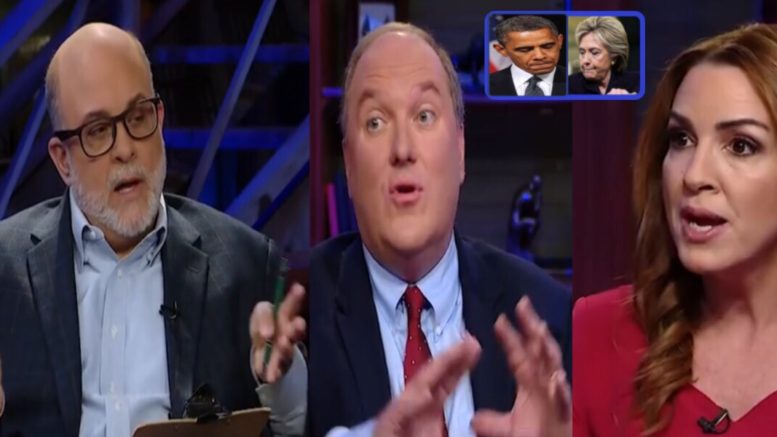 In an interview with Mark Levin on Fox News’ “Life, Liberty & Levin” that is airing Sunday at 10 PM ET, journalists John Solomon and Sara A. Carter reacted to the close of the Mueller investigation and what should happen next.

This comes after Attorney General William Barr wrote that Robert Mueller “did not find that the Trump campaign, or anyone associated with it, conspired or coordinated with the Russian government.”

Mark Levin asked John Solomon what President Obama knew during the time his Justice Department was seeking a Foreign Intelligence Surveillance warrant to spy on Carter Page, a member of the Trump campaign team.

He went on to say, “The President gets a national intelligence agency briefing, at least once a day, sometimes twice a day…”

Levin, who was the deputy attorney general to Reagan’s top lawman Edwin Meese, said, “If we ever saw a FISA application involving the opposition campaign” Meese would have “taken a car right over to the President to fill him in– in case there was a political aspect to it.” (Video Below)

In regards to the warrant to spy on Trump’s campaign, Levin asked Solomon, “Is Barack Obama the only human being on the planet who didn’t know anything?”

Solomon said Hillary Clinton should also be interviewed to see how much she knew about the contact between former Glenn Simpson and ex-MI6 spy Christopher Steele. Simpson worked for Fusion GPS, Christopher Steele compiled the “Steele dossier.” (Video Below)

Carter added that we need full transparency in this matter and listed off John Brennan, James Clapper, and Samantha Power as some names involved behind the scenes.

Powers was Obama’s United Nations ambassador, and Carter said that she should be asked why she “unmasked” 260 individuals during her tenure.

“The American public, we deserve that much. We deserve to know what was happening, because every attempt to leak names, to listen in on Carter Page’s conversations and therefore all the people he was speaking to– everything was geared at either removing President Trump, impeaching him, or stopping him from becoming President. That is a duly elected President of the United States of America.” Carter said emphatically. (Video Below)

We leave you with some words from Tom Fitton: “Obama knew.”