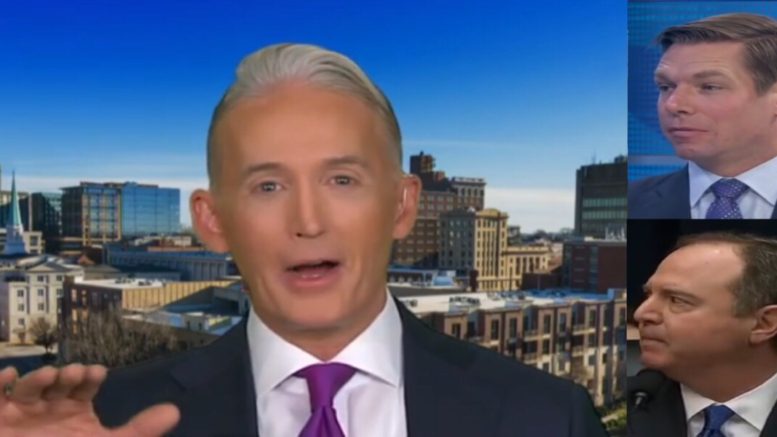 Gowdy made his case why he believes Mueller’s report should not be released in its entirety.

During the interview, Trey Gowdy began by taking a swipe at Rep. Schiff, who is facing calls to step down from his chairmanship over the House Intelligence Committee after all 9 Republicans of the Committee called for his resignation. They cited McCarthyism, leaks and lies from the congressmen in an attempt to discredit President Trump.

“Adam is a deeply partisan person. He did everything he could to make sure Hillary Clinton became the next President, and he’s done everything he could, and he failed at that, to keep a cloud over the Trump presidency.” Gowdy said adding that “the committee has lost confidence in his ability to lead.”

He pointed out if Schiff continues to leak like a “screen door on a submarine,” the committee will stop giving him information, and Speaker Pelosi will have no choice but to replace Schiff. (Continued Below)

Maria Bartiromo wanted Gowdy’s input on Attorney General William Barr releasing the full Mueller report. “I’m all for my fellow citizens understanding what Russia tried to do to this country. I think it will be unifying. The other part of the equation is: with whom, if anyone, did they do it?”

He noted that Mueller didn’t find the lowest level of evidence that anyone in the Trump campaign colluded. “There’s not even probable cause,” he said.

Gowdy explained why he doesn’t think Mueller’s report should not be released in its entirety. “I realize the populist thing to do is say ‘release it all’, which by the way, is against the law. You can’t release it all.” (Video Below)

“Lets just assume you release what you can and it’s not classified. We are now in the unchartered territory of releasing reports on people for whom there’s not even the lowest level of evidence standards, not even probable cause.” He justified.

Gowdy pointed out, “And once you begin to go down that path, where you’re going to issue reports and do press conferences on people who are not indicted, for whom there’s no evidence they committed a crime, then we’re in a brand new day politically when the Department can do oppo research on a campaign and then on the ‘guys on a report,’ release it, but never charge them.”

He concluded, “I hope we never get to that point, and that why I’m in a very small minority that doesn’t think that part of the report should be made public. I realize I’m in the minority, but I’m not a populist. ”