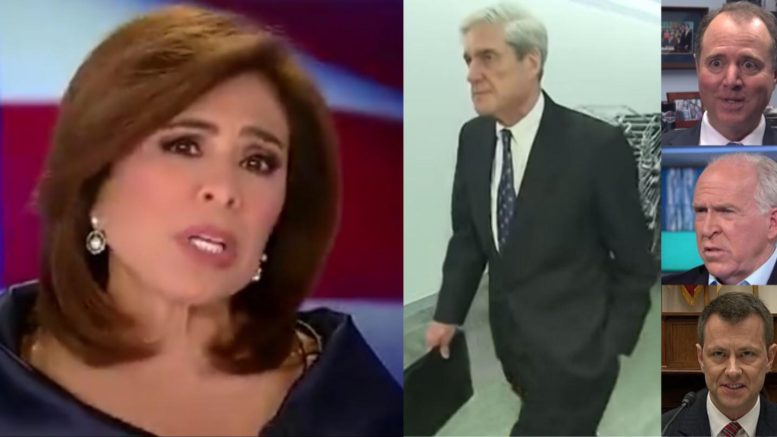 After two weekends of being off set, Judge Jeanine Pirro kicked off her debut back with a bang Saturday evening.

In her opening, Pirro delivered a fiery monologue kicking back against the “attempted coup” against President Trump, which she warned could happen again after the completion of the Russia investigation.

Pointing to potential Foreign Intelligence Surveillance Act abuse to target the Trump campaign, Pirro spoke of an “effort to discredit this President” in which top federal law enforcement and intelligence officials planted “the seeds for indictment and impeachment.”

Among the people Pirro accused as being complicit in the scheme were former FBI Director James Comey, former Attorney Loretta Lynch, and “the snake at the head” former CIA Director John Brennan. Pirro called for a grand jury to deal with what she described as a “rogue intelligence operation” she suggested could go all the way to former President Barack Obama with a “wink and a nod,” reported Washington Examiner.

Special counsel Robert Mueller concluded that he “did not find that the Trump campaign, or anyone associated with it, conspired or coordinated with the Russian government. Attorney General William Barr shared a summary of Mueller’s report to Congress last weekend. (Video Below)

President Trump said after the report came out that “it began illegally.” He added, “And hopefully, somebody’s gonna look at the other side. This was an illegal takedown that failed. So, it’s complete exoneration. No collusion, no obstruction.”

“This is bound to happen again because these arrogant, lying, condescending, leaking haters of you and me and the America that doesn’t have power are going to do it again unless we stop them.” Pirro warned. “The only way to stop them is with justice! True justice, and that’s behind the bars, justice!”  (Video Below)

Saturday marked a proud moment as Pirro returned after being off the air for two weeks. She was reportedly suspended after stirring controversy when she questioned whether Democratic Rep. Ilhan Omar’s Islamic faith was impeding her loyalty to the U.S.

Don’t be satisfied with the Mueller report. This is bound to happen again b/c these arrogant, condescending, lying, leaking haters of you,me & the America that doesn’t have power, will do it again. And the only way to stop them is with justice. True justice- behind bars justice. pic.twitter.com/72aPr7ozmR