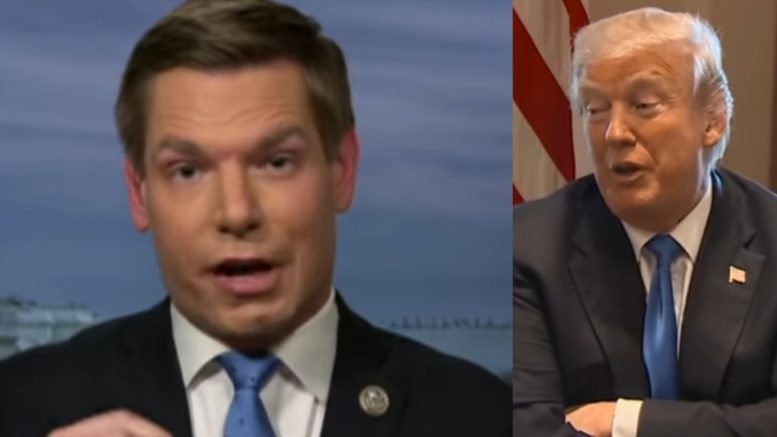 Rep. Eric Swalwell is not giving up on efforts to take down President Trump, despite Special Counsel Mueller’s findings of no Russian collusion and insufficient evidence of obstruction.

Swalwell appeared on Fox News, where he is heard virtually discrediting Mueller and saying you don’t need the report to prove President Trump committed wrongdoing.

He argued that there is a difference between proof beyond a reasonable doubt and wrongdoing.

Swalwell then claimed, “You don’t need to have the Mueller report to see all the things that this President did with the Russians.”

The Fox host shot back, “Why the hell did we go through this, spend the tens of millions of dollars we did, if you’re saying ‘I don’t need to see it to know that the President’s a crook?'” Video Below

Swalwell responded by reiterating that the Mueller investigation did turn up something, which were indictments, guilty pleas and other ongoing criminal investigations. The only problem is, none of those things Swalwell mentioned are related to wrongdoing by the President.

He then insinuated that the President is trying to ‘bury the evidence.’ Swalwell said, “If we find that you are lying or obstructing or tampering with witnesses to get away with underlying crime, then there’s a penalty for that.”

Finally, Swalwell tried comparing the situation with cheating on a spouse. He said in his tweet caption, “If your spouse cheats on you, they didn’t commit a crime. But it’s still wrong. You’d probably be mad as hell, and heck, even break up with them…” Video Below

If your spouse cheats on you, they didn't commit a crime. But it's still wrong.

You'd probably be mad as hell, and heck, even break up with them… pic.twitter.com/HOvLG0DToU