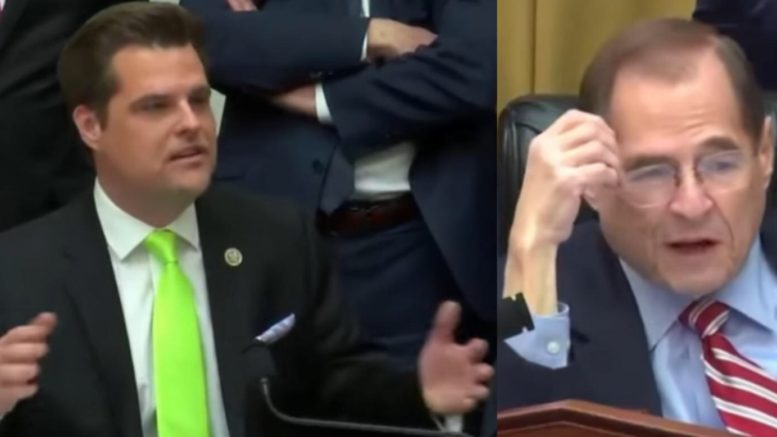 AG Barr wrote in a letter to the committee that he would turn over a summary of the report by mid-April, once he and Mueller finished redacting it for “grand jury information, classified information, information related to ongoing prosecutions, and information that may unduly infringe on the personal privacy and reputational interests of peripheral third parties.”

However, Democrats have demanded that Barr provide the full 400-page report, along with underlying evidence. Democrats didn’t get what they want so the charades will continue to “get Trump.”

He explained that for 22 months Democrats pushed the conspiracy that there was “actual evidence of collusion”, and now, clearly seeing that is not true, “we observe our colleagues moving through the stages of grief,” Gaetz said. (Continued Below)

“First, we saw shock and surprise!” Gatez exclaimed. “My colleagues would huddle together after the findings of the Mueller report released, wondering what to do next, what play to run after losing all credibility with the American people.”

“After shock, we are in the stage of denial, where the principals of the Mueller report– they just cannot be true, they cannot be accepted, they must be false, there must be more information that we can discover,” He expressed while mocking the Democrats.

Gaetz quoted Speaker Nancy Pelosi (D-CA) where she said, “In February of 2018, President Trump has surrendered his constitutional responsibility as Commander in Chief by releasing highly classified and distorted intelligence by not protecting intelligence sources and methods. He just sent his friend Putin a bouquet.” (Continued Below)

Gaetz added, “Well, there was no bouquet, no untoward relationship with Vladimir Putin, but there was a statement from the Speaker of the House acknowledging that if you do not review sources and methods, you are derelict in your duty to the country.”

“Well, now that they’re going through their stages of grief, perhaps we are approaching bargaining, because now they are trying to bargain away their own standards.” He said.

Then, he exposed Chairman Nadler who said in June 2018, “Republicans are requesting documents they know they cannot have. If the majority is rightly denied, they will do their best to undermine the credibility of the Department of Justice.”

“Well, Mr. Chairman, you are now asking for documents you know you cannot have!” Gatez declared. (Video Below)

Gaetz fired off, “And you’re doing so in order to erode confidence in the Attorney General who leads the Department of Justice, because he has concluded there was no collusion and that your principal Russian narrative was not truthful, was not credible. We were right, you were wrong, and the American people know it!” [Emphasized]

“Let’s all have some consistency, and let’s at least have some acknowledgement that you all were not telling the truth to the American people for an extended period of time. We were, and you should not be trusted!” He confidently concluded.