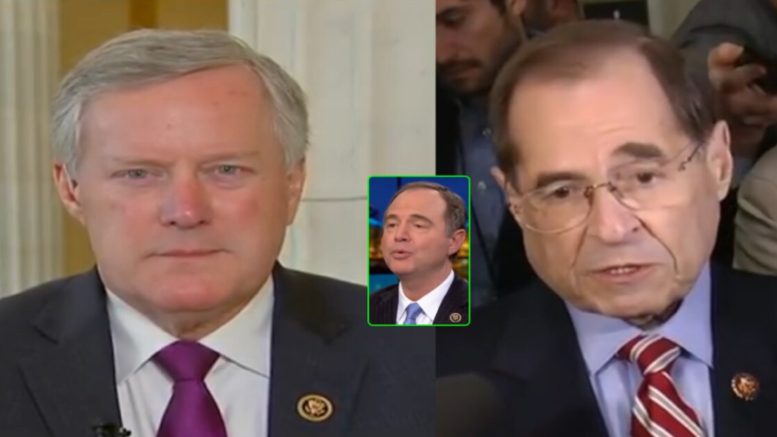 North Carolina Republican Rep. Mark Meadows said “it is a sad day for Congress and the American people.”

This comes after Judiciary Chairman Jerrold Nadler (D-NY) scheduled a markup Wednesday for the House Judiciary Committee to vote on authorizing subpoenas for the Mueller report. The committee ultimately voted 24-17 to authorize a subpoena compelling Attorney General William Barr to turn over special counsel Robert Mueller’s “full and unredacted” report.

The Chairman of the Freedom Caucus reacted to the subpoena vote Wednesday on Fox News with hosts Sandra Smith and Bill Hemmer, pushing back at Rep. Nadler and the Democrat’s grandstanding efforts.

“This was not a transparency subpoena, this was a 2020 subpoena!” Meadows declared. “You’re seeing all of this play out; it’s all political theater, it has nothing to do with really getting to the truth. Let’s take this for what it is: this is all about trying to disparage the President of the United States when his Attorney General is working with warped speed to get the information to the American people.”

“It’s really unprecedented in terms of [Barr’s] willingness to work with Congress and yet, this how he gets rewarded? It’s a sad day for Congress, and I would say it’s a sad day for the American people.” He expressed. (Continued Below)

Rep. Adam Schiff still claims evidence of collusion with the President and Russia, and Meadows doubled down on his analysis of Schiff.

“We can spin it however we want, but here’s the real reason: you got Chairman Schiff saying we should take classified information and put it out there. You got Chairman Nadler saying what we ought’ to do is violate the law and give grand jury material to the American public. Both of those are at odds with previous positions they’ve held.” He added. (Continued Below)

“If we are going to be transparent, let’s be transparent. And, there’s no law against making sure the American people see those two things.” He said.

Asked if he can trust the Democrats handling of the materia, Meadows responded, “If indeed it’s highly sensitive, then we let the gang of eight look at it.”

Meadows further tweeted, “Taking great interest in my Democrat colleague’s newfound push for transparency, issuing a subpoena for a report they’re already going to get. Now when are the subpoenas coming for the Carter Page FISA, Bruce Ohr 302s, and Papadopoulos tapes? Let’s give Americans the FULL truth.” (Video Below)

Taking great interest in my Democrat colleague's newfound push for transparency, issuing a subpoena for a report they're already going to get.

Now when are the subpoenas coming for the Carter Page FISA, Bruce Ohr 302s, and Papadopoulos tapes? Let's give Americans the FULL truth.