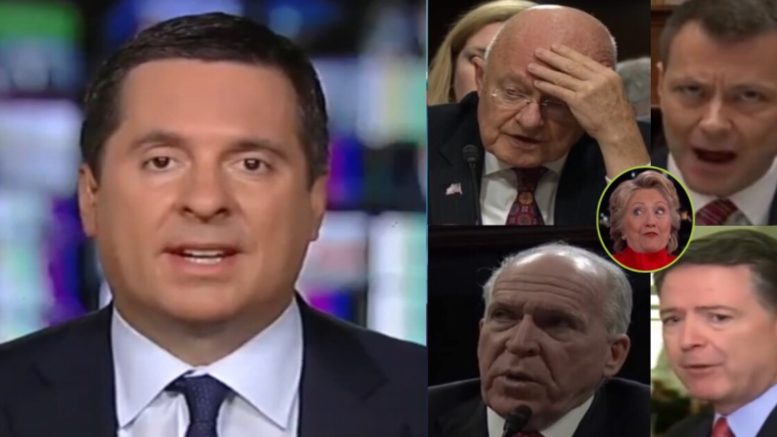 The House Judiciary Committee on Wednesday, voted 24-17 to authorize a subpoena compelling Attorney General William Barr to turn over special counsel Robert Mueller’s “full and unredacted” report. It was led by Judiciary Chairman Jerrold Nadler (D-NY) and his minions.

Reps. Jim Jordan (R-OH) and Devin Nunes (R-CA) weighed in on Fox News with host Sean Hannity about what lies ahead in the coming days, for the swamp.

The Democrats continue their Russia collusion fairytale and use the media to peddle their narrative. This includes burying how the hoax started, as well as the bought and paid for phony Steele dossier by Hillary Clinton and the DNC.

What they also don’t want to reveal is how the FBI and DOJ, under the Obama administration, and who led the effort, tried to overthrow President Trump. They have engaged in a 3 year long cover up, to hide why they didn’t indict Hillary Clinton.

But, Devin Nunes and others have other plans to unveil the truth to the American people.

Nunes, who has been working behind the scenes announced that he has up to two dozen criminal referrals coming in less that two weeks. (Continued Below)

“The American people need to have confidence in the FBI and the Department of Justice.” Nunes said.

He further explained, “We are working on the criminal referrals; there’s going to be many of them. There’s going to be at least a dozen, if not, two dozen individuals, and as we continue to get more information and build these, we want to make sure everything is finished before we turn them in.”

“There are people who definitely lied and misled Congress. If they don’t go to prison, then we have a two-tiered Justice system in this country, and it’s not going to be good for the American people.” He expressed. (Continued Below)

Nunes also said that people should be leary of getting information from only the “Mueller dossier” and pointed out that partisans wrote the document.

“What I’m interested in is not just the ‘Mueller dossier’, but I want all the information that fed into this because I am sure, just like in everything else we’ve dealt with over the last two years, there’s probably going to be a lot of ‘fake induino’ in the ‘Mueller dossier.'” He suggested.

Jordan fired off and said that if Rep. Jerry Nadler wants the truth, “Let’s get the FISA applications and the 302’s [released].” He also suggested to “call in Glenn Simpson and bring him in under oath and see if he [pleads] the ‘fifth'” like he previously did.

He also suggested bringing in John Huber, and Bob Mueller. (Video Below)