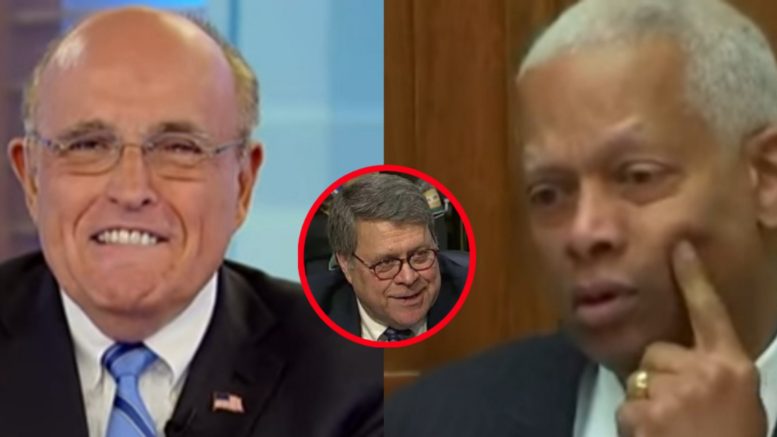 Instead of accepting findings from Special Counsel Mueller’s 2-year investigation, Democrats have pivoted to conspiracy theories. Democrat Congressman Hank Johnson is even speculating that Attorney General Barr committed obstruction of justice as part of a cover-up effort.

Rudy Giuliani joined Sean Hannity to react to the latest turn of events.

Hannity presented the text-book definition of “obstruction of justice,” to which Giuliani said, “To obstruct justice you have to threaten, you have to impede, you have to get in the way of somebody.”

Giuliani used Mueller team’s attempt to push obstruction on the President as an example, which he said prosecutors went the route of Trump saying “I hope” to prove obstruction occurred.

He stated, “Nobody ever started an obstruction case with ‘I hope.’ Nobody ever did obstruction by putting out a legal memo for the whole world to see.”

Giuliani said everyone will soon be able to see how accurate Barr’s summary of the Mueller Report is soon, which he predicts will be “100% accurate.”

He then slammed Democrat Congressmen who are making “wild, crazy, insane threats.” Giuliani said, “Their claim of obstruction against the Attorney General of the United States is no better than the claim of obstruction by the angry Democrats that tried to claim the President was obstructed.”

He continued, “The President didn’t obstruct anything. And the best evidence of that is they completed their darn investigation. How the heck did it get obstructed?”

Giuliani then tied it to Barr, when he said questioned, how can somebody obstruct an obstruction case where there was no crime? He said the real wrongdoing is the prosecutors who are leaking, which Giuliani said, “I thought Mueller didn’t leak?! Ha! You believe that one and I’ll sell you the Brooklyn Bridge.”