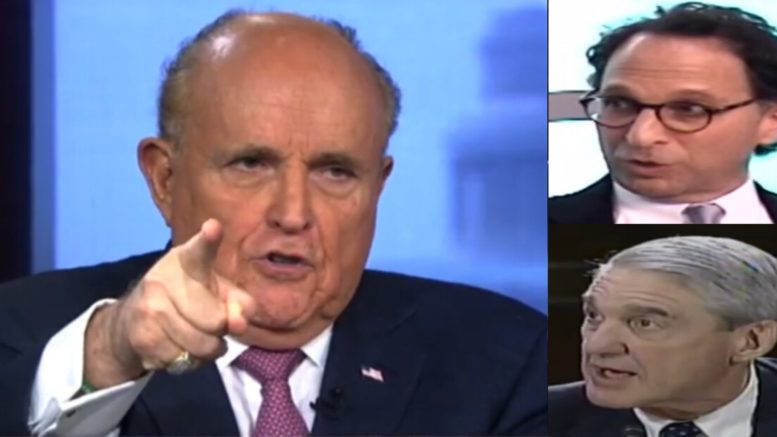 President Trump’s lawyer, Rudy Giuliani joined Fox News Sunday with host Howard Kurtz on “MediaBuzz” where he said that he’s upset with the media for reporting on leaks from Special Counsel Robert Mueller’s team that Attorney General William Barr failed to properly summarize the contents of the highly anticipated inquiry.

This comes after The New York Times reported “sources” that alleged there were concerns raised by some members of Mueller’s team that the report was more damning of President Trump than Barr has publicly indicated.

As reported by Fox News, The New York Times reported on the upset among some Mueller staffers over Barr’s handling of the report – particularly the attorney general’s four-page summary that noted there was no evidence of collusion between the Trump campaign and Russia, and Barr’s decision not to proceed with obstruction of justice charges against Trump. Mueller’s decision to skip prosecutorial judgment “leaves it to the attorney general to determine whether the conduct described in the report constitutes a crime,” Barr wrote.

Rudy Giuliani said of the “unnamed sources” from the New York Times, “That leak really indicates all you need to know about Mueller’s prosecutors. Leaking like that… that’s been the biggest canard in this investigation.”

The newspaper’s sources did not explain why some in Mueller’s team thought the findings were more damaging to Trump than Barr has revealed, but the report is expected to outline the president’s attempts to thwart the investigation, per Fox News.

“There is nothing wrong with the newspaper, there is something wrong with the prosecutor. This tells me they don’t have anything, because if they were malicious enough to do that and they had a smoking gun, they wouldn’t say in general it’s very damaging.” Giuliani said. (Continued Below)

“In fact, a good reporter would have asked, ‘give me an example.’ They didn’t get an answer; there isn’t anything.” Giuliani added.

(Related: O’Reilly Lays Out How He Knows The NYT Piece Is ‘Just B.S.’ & How Trump Can ‘Cripple’ Them)

A senior Justice Department official said on Thursday that the reporting was “not true,” and claimed the outlet is guilty of “misreporting.” (Continued Below)

(Related: Giuliani Reacts As Dems Now Speculate AG Barr Committed Obstruction: ‘How The Heck Did It Get Obstructed?’)

He also suggested that the House Democrats are running a “kangaroo court” and “leaking” as well.

Giuliani described the situation as “I will execute you, but I will give you a trial first. That’s essentially how unfair they’ve been, nothing like Watergate. They had the Watergate report for 37 years and it never leaked. These guys can’t hold on to a piece of paper for two days before it leaks.”

President Trump took to Twitter on Sunday, where he also slammed the “13 Trump haters and angry Democrats” on Mueller’s team for their illegal leaks to the “fake news media”.

He wrote, “Looks like Bob Mueller’s team of 13 Trump Haters & Angry Democrats are illegally leaking information to the press while the Fake News Media make up their own stories with or without sources – sources no longer matter to our corrupt & dishonest Mainstream Media, they are a Joke!”

Looks like Bob Mueller’s team of 13 Trump Haters & Angry Democrats are illegally leaking information to the press while the Fake News Media make up their own stories with or without sources – sources no longer matter to our corrupt & dishonest Mainstream Media, they are a Joke!

(Related: Cohen Offers Dems More Info On Trump In Exchange For No Jail, Meadows & Jordan Fire Back: ‘He’ll Say Or Do Anything’)