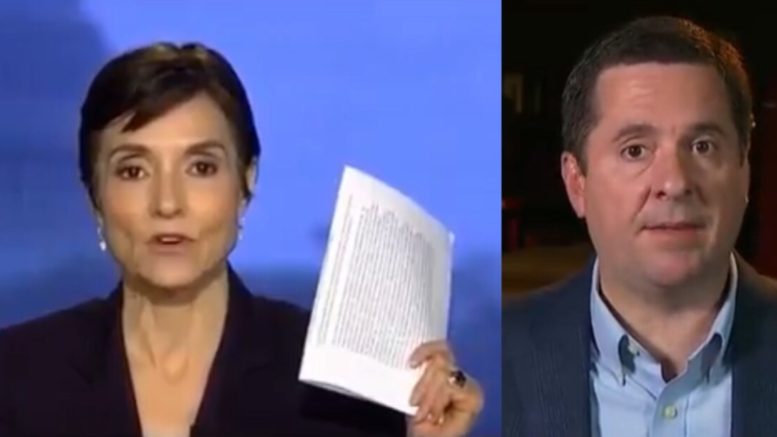 On Sunday, the top Republican on the House Intelligence Committee, Rep. Devin Nunes (CA), joined host Maria Bartiromo on Fox News’ “Sunday Morning Futures” where he revealed his plans to submit eight criminal referrals to the Justice Department this week.

The referrals Nunes discussed are related to the Obama administration’s handling of the Trump-Russia investigation.

Devin Nunes explained that the referrals will be made for alleged leaks of classified information to the media, for manipulating intelligence and for misleading foreign intelligence surveillance court judges regarding the Steele dossier. “All of these are classified or sensitive.” He said.

Chief intelligence correspondent for Fox News, Catherine Herridge, broke down Nune’s eight referrals and suggested who may be implicated in them.

Herridge explained that the Republican led investigation focused on the early stages of the Russia probe, and the evidence that was used to justify the FBI’s counterintelligence case against the Trump campaign. (Continued Below)

Catherine laid out Nunes’ referrals: two on conspiracy, one on global leaks, and five on lying or misleading Congress.

“While the Congressman has not named names, in the past he has singled out the co-founder of Fusion GPS, Glenn Simpson, whose firm was behind the anti-Trump dossier.” She said.

Catherine additionally pointed to British spy Christopher Steele, who authored the dossier and who was the subject of a Senate referral last year. (Continued Below)

The dossier, authored by Steele and commissioned by Fusion GPS, was paid for by the Democratic National Committee and Hillary Clinton’s presidential campaign through the law firm Perkins Coie. It included salacious and unverified allegations about Trump’s visit to Russia before he was president and has become a central focus as lawmakers investigate the origins of the Russia investigation.

The dossier, which has been at the center of an intense power struggle between congressional Republicans and the FBI, specifically cites the DOJ and FBI’s surveillance of Trump campaign adviser Carter Page, saying the dossier “formed an essential part” of the application to spy on him, reported Fox News.

In a letter on Monday, Collins called on Nadler to seek Mueller’s testimony, rather than attacking Attorney General William Barr, stating that this is the best path in order to obtain transparency.(Video Below)

(Related: Sen. Grassley On Nunes’ Referrals: ‘If Hillary Clinton Would’ve Been Elected President, None Of This Stuff Would’ve Been Known’)