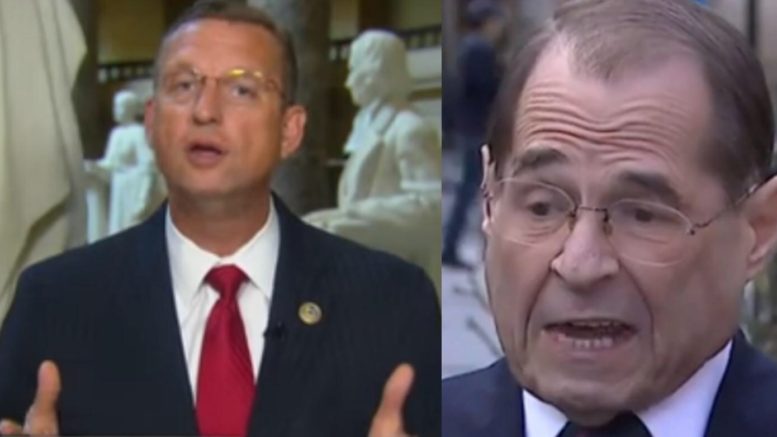 In a letter on Monday, Collins called on Nadler to seek Mueller’s testimony, rather than attacking Attorney General William Barr, stating that this is the best path in order to obtain transparency.

Attorney General Barr has promised to provide as much transparency as he possibly can, but that’s  never going to be good enough for some Democrats as they continue their relentless attacks against the President.

“If you seek both transparency and for the American public to learn the full contours of the Special Counsel’s investigation, public testimony from Special Counsel Mueller himself is undoubtedly the best way to accomplish this goal,” Collins wrote to Nadler. (Continued Below)

“To that end, Special Counsel Mueller should be invited to testify before the Committee during the week of April 22. Although the House is expected to be in recess that week, I think we can agree this business is too important to wait, and Members of the Committee will surely return to Washington at such a critical moment in our country’s history,” Collins continued.

Robert Mueller in his report, found that there was not evidence of collusion or coordination between members of the Trump campaign or Russia. (Continued Below)

President Trump and Republicans said that Barr’s letter is an exoneration of the Commander in Chief.

Republicans also note that Nadler’s demands for AG Barr to release the entire report amount to asking the president’s top law enforcement official to violate the law, with many pointing to federal rules that prohibit the public release of grand jury material unless there is a court order authorizing their release.

“You and your fellow Democrats created an untenable but politically convenient situation: force Attorney General William P. Barr to break the law to comply with your subpoena or label him as part of a cover-up if he does not,” Collins said. (Continued Below)


Collins also wrote on Twitter Monday along with posting his letter and said, “Democrats can cite no precedent for their demands for grand jury information from the #MuellerReport, but there’s a solution we should all be able to agree on: The Judiciary Committee should invite the Special Counsel to testify immediately.”

President Trump said on Monday, “The Democrats will never be satisfied, no matter what they get, how much they get, or how many pages they get. It will never end, but that’s the way life goes!” 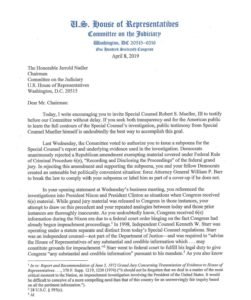 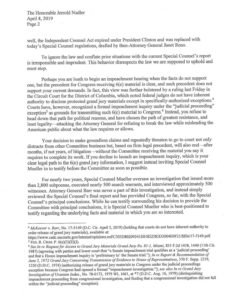 Democrats can cite no precedent for their demands for grand jury information from the #MuellerReport, but there’s a solution we should all be able to agree on: The Judiciary Committee should invite the Special Counsel to testify immediately. pic.twitter.com/TgofQhAb9D

(Related: Rep. Collins Discloses Why Lynch Is Now At The Center Of Investigative Crosshairs: ‘Loretta Lynch Has Some Explaining To Do’)