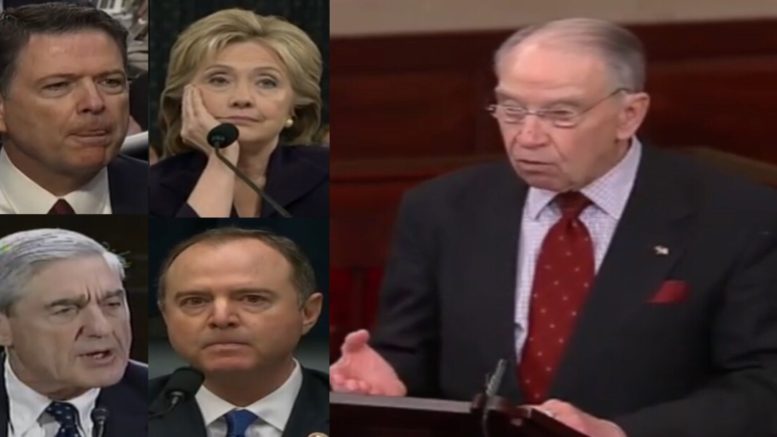 Sen. Chuck Grassley (R-IA) took to the Senate floor on Monday where he blasted Democrats for their blatant double standards, hypocrisy, and inconsistencies.

Grassley called out Democrats where he exposed the irony of the “Russia collusion hoax” and further he dropped the hammer on the Clinton investigations. This comes after he also torched Democrats for demanding President Trump’s taxes.

In a fiery speech on the floor, Sen. Grassley came right out and said that Democrats falsely proclaim that the Trump campaign colluded with Russia, but Special Counsel Robert Mueller found that no collusion existed. Then, he announced who did.

“The fact that there was no collusion is a very positive development for not just the administration but the entire country. However, it does seem that the real collusion occurred with the Democrats. It was the Clinton campaign and Democratic National Committee that hired Fusion GPS to do opposition research against candidate Trump.” Grassley disclosed. [Emphasized]

“You see, it was the Clinton campaign and DNC that funded the document that largely created the collusion narrative. A narrative that’s been deemed false. And that’s the irony here. The Democrats paid for a document created by a foreign national with reported Russian government sources. Not Trump. The Democrats.” He said. (Continued Below)

“But, apparently it’s not over yet. Or so the Democrats will tell you. Their next step is to subpoena the entire Mueller report.” He continued.

Grassley said he agrees that Congress and the public should see the report, but noted that “Democrats have requested more than just the report. They’ve asked the Justice Department to also produce the Mueller report’s underlying evidence, including all intelligence-related information.”

“I agree with the need to see as much information as possible. In fact, I’ve cosponsored a bill that would do just that. But, the Democrats’ fury over Mueller’s findings and their inconsistent positions makes me think all of this is more about politics than principle. After all, the chairman of the House Judiciary Committee opposed the public release of this type of information in the 1990s.” He expressed. (Continued Below)

Grassley however, wants to see all of the documents since Democrats want to play dirty political games.

“To guard against that political gamesmanship, there’s only one legitimate way to do this: let’s see all the documents. And by “all” I mean we should see every single piece of evidence—including evidence connected to how the Russia investigation started. That should be an easy ask. You know why? I’ve already requested that information.” He explained.

“For example, I’ve requested documents related to Steele, his dossier, and campaign-related FISA applications. These documents relate to actions taken by James Comey, Peter Strzok, and Bruce Ohr, and are critical to Congress fully understanding the creation of the Russia investigation. If Congress is going to review the Mueller report and all underlying information, it should be able to review information relating to how the Russia investigation started.” He stated.

To be consistent, Grassley suggested, “We shouldn’t stop at the Russia investigation. The Democrats want all the Mueller information but are turning a blind eye to other investigations where Congress, and the public, have yet to see it all. Again, that leads me to believe their request for Mueller-related documents is a political ploy.”

He wondered will Democrats ask the Justice Department for all the underlying information relating to the Hillary Clinton investigation?

He also named Uranium One. “I’ve been pushing for years for more answers about this transaction that allowed the Russian government to acquire U.S. uranium assets. I’ve received classified and unclassified briefings about it from multiple agencies. And I’ve identified some FBI intelligence reports that may shed more light on the transaction.” He said.

“Just the other week, my staff were told that the Attorney General has refused to provide access to those documents. Well, if the Democrats demand intelligence-related information from the Justice Department regarding the Mueller report, there’s no reason why they shouldn’t do the same for Uranium One. And if the Justice Department provides that information about the Mueller report, well, there’s no reason why they should withhold the Uranium One material.” Grassley continued. (Continued Below)

“If the Democrats want to be consistent, they’ll have to treat the Clinton, Uranium One, and Russia-related investigations the same. Anything less than that reeks of political gamesmanship and sets a clear double standard.” He declared.

Grassley also said that Democrats are looking for absolutely anything they can to make a case, when there is no case. But they, and the Obama Justice Department, didn’t bat an eye when Clinton’s associates deleted records subject to congressional subpoena and preservation orders.

“In March of 2015, Secretary Clinton’s attorneys had a conference call with Paul Combetta, the man who helped manage Clinton’s non-government server. After that call, he deleted Clinton’s emails with BleachBit, a software program designed to prevent forensic recovery. I’ve seen no evidence that anyone has even speculated that the President ever did that or instructed anyone to go that far.” He pointed out.

“What also troubles me about one aspect of the Clinton investigation is that the FBI agreed to limit the scope of review to her time as Secretary of State. That eliminated potentially highly relevant emails before and after her tenure that could have shed light on why she operated the non-government server. It also eliminated emails around the time of that conference call that could have shown what exactly was intended in deleting those emails.” He added.

“And lastly, the FBI agreed to destroy records and laptops of Clinton’s associates after reviewing them. That’s an astonishing agreement in light of the fact those records could have been relevant to ongoing congressional inquiries that the FBI knew about. Where were the Democrats when all of that happened?” He inquired.

“Where was their outrage at the potential obstruction of justice and obstruction of congressional oversight? Seems to me that if the Democrats want to be consistent they’ll have to address what was done – and what was totally ignored – in the Clinton investigation. Grassley asked. (Video Below)

He concluded in that the Democrats want material related to the Russia investigation, and that they “ought to be consistent with other investigations.”

“And I’ll tell you right now, the Democrat’s obsession with bringing Trump down is nothing but a double standard if they’re going to ignore other investigations of national importance. If you want to be taken seriously in this country, you have to be consistent. My attitude and approach is straightforward and nonpartisan. Let’s see it all. Clinton, Uranium One, Russia. All of it. Sunlight is the best disinfectant.” He announced.

(Related: Sen. Grassley On Nunes’ Referrals: ‘If Hillary Clinton Would’ve Been Elected President, None Of This Stuff Would’ve Been Known’)

“To my colleagues in the Democrat party, are you afraid to be consistent? Are you afraid of what might be found? Let’s work to make sure the American people have as much information as possible about all of these investigations. After all, they’re paying for the work. Don’t forget that.” Grassley urged.