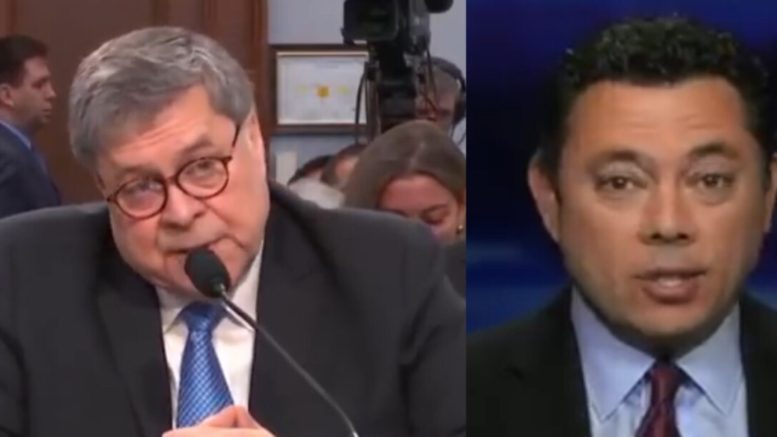 “The most explosive and consequential thing that the Attorney General said is that he is going to look at the genesis of how this investigation started, that the Inspector General’s report coming in the May-June time frame– that has very series implications.” Chaffetz explained.

During Tuesday’s hearing, the Attorney General was asked about the referrals Rep. Devin Nunes is giving to Barr, and he confirmed: “If there’s a predicate for an investigation, it’ll be conducted.” (Continued Below)

Chaffetz pointed out that Democrats are going to try and “muddy the waters” and have tried to undercut the legs of the Attorney General.

Chaffetz added, “That talking point from the Democrats is dead and off the charts now, as well.” (Continued Below)

Barr noted that on March 5th he and the Deputy Attorney General, Rod Rosenstein, met with the Special Counsel prior to the release of the report. “We had an inkling as to what was coming our direction.”

Asked why he thought “inkling” was so important, Chaffetz said, “The Democrats seem to think they took this 300-400 page report, and 48 hours later that he just wrote a summary. That was not the case. [Barr] used the word ‘inkling’ several times giving indication that they were given a heads up along the way, along the progress.”

He noted that Rosenstein was supposed to leave in mid-March but stayed and helped Barr with the continuity of communication to generate the summary report. “It totally undercuts what the Democrats have trying to say, which is that this summary is bogus. They still want some scalious detail out of this thing, but I don’t think they’re ever going to get it.” Chaffetz stated.

(Related: Barr Indicates How He Reached A Conclusion On Mueller’s Report In Two Days, Confirms Congress Won’t Get Unredacted Version)

Barr also revealed during the hearing that he offered Mueller an opportunity to review his summary letter before making it public, but Mueller declined. (Video Below)

“Democrats can try and beat their heads against the wall as long as they can and try to say there’s some little detail in there, but the bottom line is: there’s not more prosecutions and there is nothing to their notion that they have just been barking on for two years that there was some sort of collusion with Trump campaign. It just was never there.” He expressed.

Asked if Democrats will finally accept the findings of the report, Chaffetz said, “No, I don’t think they will. At some point, I think the American people are going to take a deep breath and say the Democrats have tried to sell us this collusion for two years. There was nothing to it.”

“The most serious, explosive and consequential thing will come in May or June when we hear from the Inspector General about what happened in the genesis of spying on a political campaign. That is by far the bigger story!” He declared.

(Related: Barr Sets The Record Straight With Congress On The Results Of The Russia Probe: ‘The Letter Speaks For Itself’)