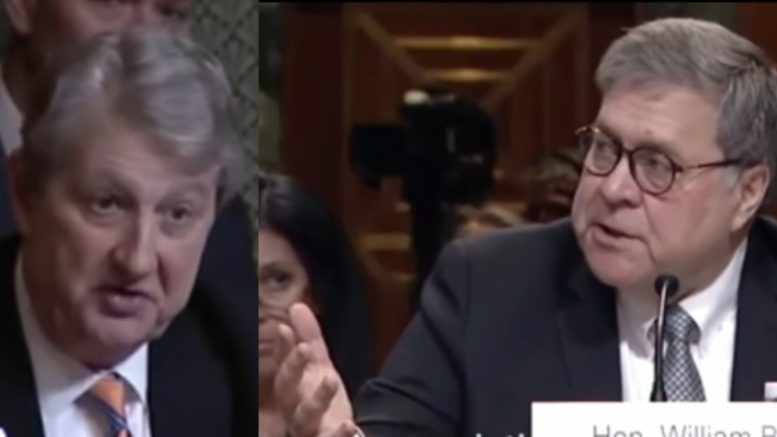 Attorney General William Barr testified on Capitol Hill Wednesday before the Senate Appropriations subcommittee where a hearing was held on the President’s fiscal year 2020 funding request and budget justification for the Department of Justice.

However, the committee focused on pressing Barr about the Mueller report and his summary ahead of the public redacted version that is said to be released in a week.

During the Wednesday’s hearing however, the Attorney General explained why he can’t give Congress the unredacted version, even after Rep. Jerry Nadler (D-NY) threatened with a subpoena and Democrats on the Hill calling for the full report to be publicly released.

Democrats have their base convinced that the full report should be released, but in fact, it’s against the law. Barr is not going to break the law because of their political grandstanding ahead of the 2020 presidential election.

Sen. John Kennedy (R-LA), has a way of asking questions and building a case to get to his main point. In doing so, during his time to quizz the Attorney General, not only did he throw down some common sense for the committee and Trump haters to hear, he also called out his colleagues for “previously leaking information.”

Asked if he turned over the Mueller report without grand jury information redacted to only members of Congress, would there be a material risk that the grand jury information would leak, AG Barr responded, “I think so.” He also agreed that’s it’s been known to happen in the past “occasionally.” (Continued Below)

Barr explained why that would be bad if it leaked: “We depend on the secrecy of the grand jury for our whole system of justice, and people have to be assured when they go into the grand jury that [the information] is going to be [conducted in] confidential sessions.

Asked if he turned over an unredacted report to the members of the Congress that included material that might impair an existing investigation(s) and if there is a material risk that it might leak, the Attorney General confirmed, “Yes, there is a risk.”

When asked why that is bad, Barr said, “Presumably the reason people are interested in seeing the report is because they believe it’s important for the criminal justice process to work.” He added, “Allowing this other information to come out would frustrate from– the prosecutor’s standpoint, the system from working in other cases and from the defendant’s standpoint, [it] would be potentially unfair to the defendant.” (Continued Below)

Barr noted that in some of the cases there are also “gag orders” from the court that is prohibiting information being released.

Asked if he turned over unreacted information that could raise “reputational risk” and if it could be leaked, Barr said, “Yes, Senator.” Then, he explained why it was bad: “If someone has not committed a crime at the end of the day, and in this context, if they’re not public office holders, they’re private citizens, the government is not in a position to say they did anything wrong. It would be fundamentally unfair to put that information out.”

Kennedy dropped his main point and the grand finale while his colleagues were all ears, next.

“Would that be especially the case of someone who thought their communication was confidential, kind of like Dr. Ford, who thought she was making a confidential communication until some member of the Judiciary committee or their staff(s) turned her life upside down and leaked that?” Sen. Kennedy asked.

Barr essentially agreed without admitting it, but he did say he wasn’t aware of the circumstances. “It was probably one of the greatest injustices that I’ve seen in the time I’ve been here.” The Louisiana Senator expressed.

Kennedy was referring to Sen. Dianne Feinstein’s office, who leaked Dr. Ford’s letter to the public before Justice Kavanaugh was sworn in, and she was sitting in the room when he let the cat out of the bag. (Video Below)

The Attorney General also confirmed that the FBI isn’t supposed to act on their political beliefs in doing their work at the Department.