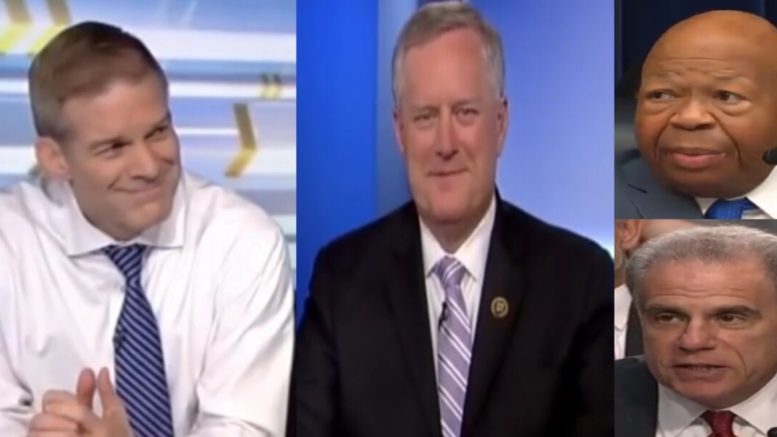 Reps. Jim Jordan (R-OH) and Mark Meadows (R-NC), called on the Oversight and Reform Committee Chairman, Rep. Elijah Cummings (D-MD), to request the public testimony of a Justice Department watchdog once he finishes his investigation into the use of surveillance warrants during the 2016 election.

In a letter on Wednesday, the Congressmen pressed chairman to secure a date for DOJ Inspector, General Michael Horowitz, to testify following the completion of his review.

Jordan, Meadows and other Republicans have long been eager to see the probe’s findings on whether federal authorities — who they claim were biased against President Trump during the 2016 election — misled a secretive court in order to obtain a surveillance warrant on Carter Page after he left the Trump campaign, reported the The Hill.

The congressmen allege that the federal authorities “anti-Trump animus” influenced their actions as they conducted a counterintelligence investigation into ties between the Trump campaign and Russia.

Their letter comes after Attorney General William Barr testified before the House Appropriations Committee on Tuesday and confirmed that Horowitz is expected to complete his review in May or June.

“As the committee of jurisdiction for inspectors general, we write to request that you invite Mr. Horowitz to publicly testify before the Committee immediately following the completion of his review.” Meadows and Jordan wrote. (Continued Below)

During Tuesday’s hearing, Attorney General William Barr said, “The Office of the Inspector General has a pending investigation of the FISA [Foreign Intelligence Surveillance Act] process in the Russia investigation and I expect that will be complete in probably May or June, I am told.”

“So, hopefully, we will have some answers from Inspector General Horowitz on the answer of the FISA warrants. More generally, I am reviewing the conduct of the investigation and trying to get my arms around all the aspects of the counterintelligence investigation that was conducted during the summer of 2016,” Barr added. (Continued Below)

Official Letter to Chairman Cummings from Reps. Meadows and Jordan: