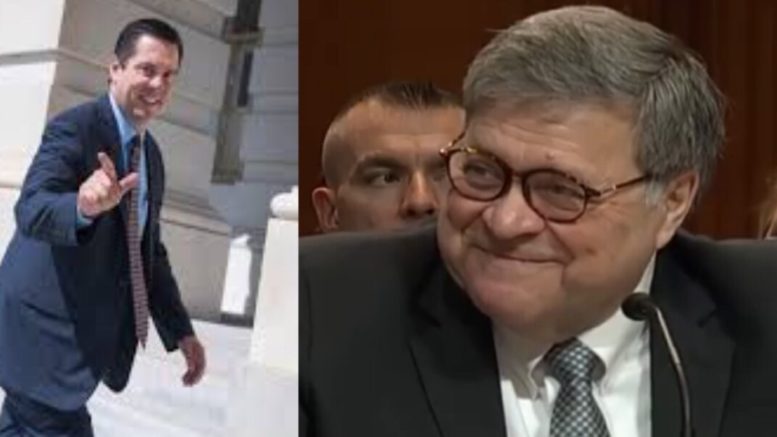 Rep. Devin Nunes (R-CA) followed through on his word and sent criminal referrals to Attorney General William Barr on Thursday.

This comes after the top ranking Republican on the House Intelligence Committee announced on Fox News’ “Sunday Morning Futures” where he planned to to submit eight criminal referrals to the Justice Department.

Nunes said he and Rep. John Ratcliffe (R-TX) are also prepared to brief AG Barr on alleged misconduct during the FBI’s investigation into Russian meddling and contacts with Trump advisers during the 2016 campaign.

The referrals stem from the investigation conducted by the House Intelligence Committee when Republicans held the House majority.

“As part of that investigation, Committee Republicans identified several potential violations of law,” Nunes wrote in a letter to the Attorney General on Thursday. See Below

As reported by Catherine Herridge, the notification comes after Barr testified to Congress this week that he is reviewing the “conduct” of the original FBI investigation. During the second of two Capitol Hill appearances on Wednesday, Barr said he believes “spying did occur,” and the question is “whether it was adequately predicated.”

Nunes has been looking into such surveillance and other issues for months. In his letter Thursday to Barr, Nunes said he would have his staff arrange a time for him and Ratcliffe to “brief you directly on eight criminal referrals.” Video Below

Congressman Nunes said on Wednesday, “It’s great to have an Attorney General doing [their] job!”

Nunes Referral Notification by on Scribd

(Related: Mark Meadows Hints At Even More Criminal Referrals By Devin Nunes: ‘They Will Be Held Accountable’)