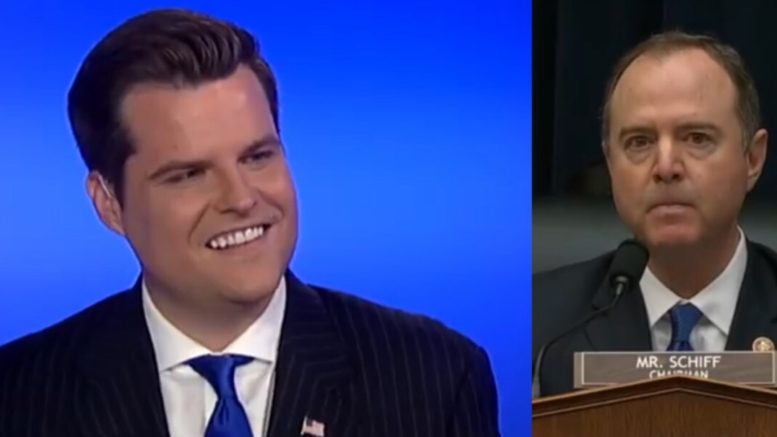 Congressman Matt Gaetz (R-FL) proposed a new resolution on Wednesday and announced it on Fox News with host Tucker Carlson.

The proposal is targeted at House Intelligence Committee Chairman Adam Schiff for his handling of the Russian collusion theory.

The resolution Gatez put forward is titled “Preventing Extreme Negligence with Classified Information Licenses Resolution“, or “Pencil Act” for short, that calls for Schiff’s resignation from the committee.

“‘Pencil Act’ for our favorite pencil,” Gaetz expressed. This comes after President Trump coined Schiff with the nickname “Pencil Neck.” 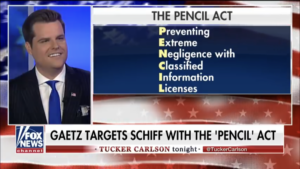 “I have filed legislation today, sent to the House, that Adam Schiff needs to be removed from the Intelligence Committee, because how are the rest of us supposed to be able to rely on a man, who you just showed, lied to the American people when he said that there was not spying? Or when he lied and said that there was actual evidence of collusion or clear evidence of collusion?” Gaetz expressed.

In March 2017, Schiff claimed he had seen “more than circumstantial evidence of collusion” and has peddled his conspiracies since.

Last month, Republicans on the House Intelligence Committee demanded Schiff to step down as chairman over his repeated claims to have evidence of Trump-Russia collusion.

“Your actions both past and present are incompatible with your duty as Chairman of this Committee. We have no faith in your ability to discharge your duties in a manner consistent with your Constitutional responsibility and urge your immediate resignation as Chairman of this Committee.” A letter, in part read, written from the Republican lawmakers. Nine committee members signed off on it.

Rep. Gaetz tweeted on Wednesday, “#BREAKING: Today I filed the “PENCIL Act,” expressing the sense of the House of Representatives that “Congressman Adam Schiff should be removed from the House Intelligence Committee and his security clearance immediately revoked.” (Video Below)

#BREAKING: Today I filed the “PENCIL Act,” expressing the sense of the House of Representatives that “Congressman Adam Schiff should be removed from the House Intelligence Committee and his security clearance immediately revoked.” pic.twitter.com/1FsMt6NUjr