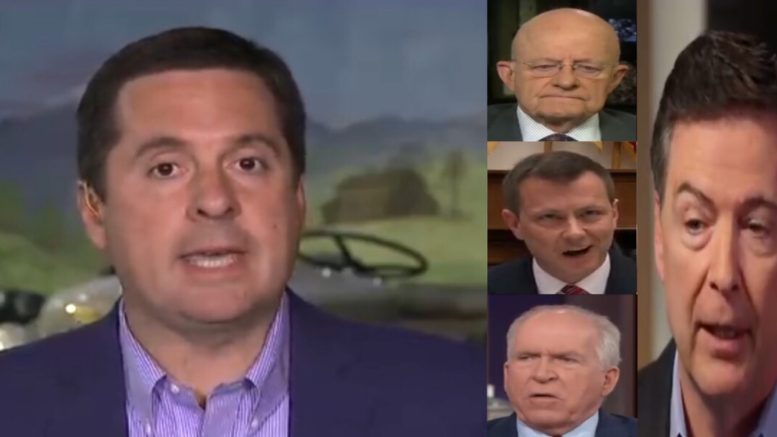 This comes after Nunes sent a letter to Attorney General William Barr on Thursday that said his team “identified several potential violations of the law” as part of an investigation into origins of the Trump-Russia investigation.

During his interview, Rep. Devin Nunes said the public may never know who is mentioned in criminal referrals sent to the Justice Department.

“We don’t know if you’ll ever know who is named, but I can tell you that if you follow the Russia hoax closely, if I gave you seven guesses, you’d probably get the five people that we have referred.” Nunes said.

(Related: Devin Nunes Follows Through On His Word & Sends Criminal Referrals To Barr With The Intent Of A Briefing)

However, he gave some insight into what the referrals entail. (Continued Below)

Nunes said, “So there’s five direct referrals based on lying, obstruction, congressional investigation, and leaking. We have a global leaks referral, which involves just a few reporters but could involve multiple people. I don’t think it’s that many people, because I think they probably only have a few sources within these agencies. And then you have conspiracy referrals. One is based on the manipulation of intelligence. The second one is based on FISA abuse and other matters. So that’s where we stand.Those are the 8 referrals at this point.”

In the letter he sent to Attorney General William Barr on Thursday, Nunes said he and Rep. John Ratcliffe (R-TX) want to meet to discuss eight criminal referrals and that his staff would reach out to the Justice Department to set up a meeting. (Continued Below)

“In late 2015, early 2016, spying began on the Trump campaign. That information leaked– that led to what they considered to be ‘legal spying.’ They acknowledged that they started doing [spying] in the end of July.” He added.

During a congressional hearing this week, Barr confirmed he is putting together a team to examine the FBI’s initial investigation into President Trump’s campaign in the summer of 2016. “Obviously, if there is a predicate for investigation, it will be conducted,” He said.

The Attorney General also believes “spying did occur” on the Trump campaign in 2016, and he vowed to review the conduct of the FBI’s original Russia probe– and the focus of a related internal review shifted to the role of a key FBI informant. (Video Below)

Rep. Nunes said the “spying” was used to “create a narrative that Donald Trump shouldn’t have been President, that he’s a Russian asset and the ultimate spying was performed by former FBI Director James Comey by taking notes of his meetings with Trump and then illegally leaking them out to the press after getting fired in May 2017. Nunes said they did it so they could appoint a special counsel to spy on an acting President again.

(Related: Clapper & Brennan Slam Barr For Believing Trump Was Spied On, Gowdy Levels Them: ‘What A Drama King’)