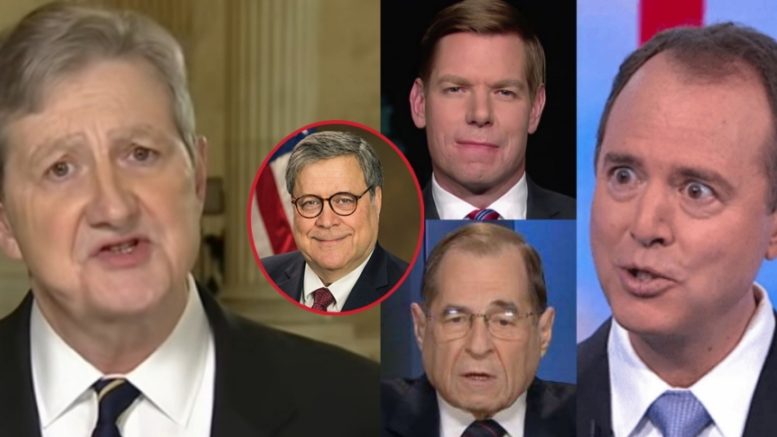 Senator John Kennedy (R-LA) is fed up with the way some of his Democrat colleagues are treating the Mueller report and William Barr’s handling of it.

In an interview with Fox, Kennedy said there are basically two groups of Democrats when it comes to the Mueller report. The first group accepts Mueller’s findings as laid out in Barr’s letter, and they want to see how he came up with his conclusions. But the second group involves those who can not accept the results of the Mueller report, and are attacking the process as well as William Barr himself.

Kennedy said, “When Bill Barr issued a summary, you would’ve thought, according to some of my Democratic friends, it was the second coming of the apocalypse.”

He then pointed out Democrats’ new outrage, because Barr wants to look into the origins of the Russia probe and if it was lawful or not.

Kennedy is worried that there may be other “bubble heads” still present in both the DOJ and FBI who acted on their political beliefs, and a full look at things by Barr would help weed them all out. He said, “They don’t need a hug and a cup of hot cocoa and be told ‘don’t do it again.’ They need to be fired and, if necessary, prosecuted.” Video Below

Kennedy then gave some advice to his Democrat colleagues who are questioning Attorney General Barr’s credibility.

He said, “Number one, leave Bill Barr alone. Let him do his job. We’ll have the report next week, the redacted report. If every third word is redacted and you can’t make sense of it, I’ll join them in raising fresh hell, but that’s not gonna happen.”

His last piece of advice to Democrats is, “Never corner someone who is meaner than you.” Kennedy warned Democrats that Barr could bite back, if not careful, if he keeps being used as a punching bag. Video Below

Related Article: Graham Reacts As Barr Signals A Review Of Intel Community Conduct: ‘None Of This Adds Up’