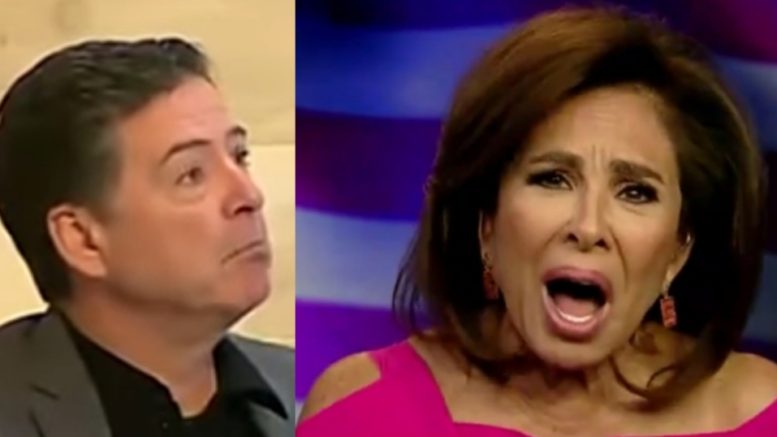 Judge Jeanine Pirro was back at it again on Saturday night after having some time to ponder the latest happenings surrounding Attorney General William Barr.

Barr made heads spin on Tuesday, after he revealed to members of Congress his intentions to look into the origins of the Russia probe, and that he has already assembled a team to do so. What made the left fume the most, however, is when Barr stated his belief that the Trump campaign was spied on.

Judge Jeanine played clips of reactions made by Nancy Pelosi, James Clapper and Chuck Schumer regarding Barr’s label of “spying” when describing what happened to President Trump’s campaign in 2016.

But the most notable reaction that Judge Jeanine focused on came from none other than former FBI Director James Comey, who said Barr’s belief that the Trump campaign was spied on is “concerning.”

Jeanine began by saying, “Jim it’s not like anyone believes a word of what you say anyway.” She cited remarks made by Comey a year ago, when he denied any knowledge of a spy planted in Trump’s campaign, when really he would’ve been the one to sign off on the affidavits for it. She even said the word “spy” was used in the FISA application.

She went on to suggest that Comey purposely hid the fact that the “fake dossier” was unverified and there were flaws in evidence he submitted for a FISA warrant. Video Below

Judge Jeanine slammed Comey for not telling Trump that there may be a foreign agent trying to influence his campaign. She said, “Your game plan was to keep Trump in the dark, leak information to the New York Times, which information was classified, in order to get a Special Counsel assigned.”

Getting Jeff Sessions to recuse himself, she believes, was also part of the plan so that Rod Rosenstein could help keep everything together, and it worked.

Judge told Comey not to be so “pompous” on the word “spy.” She said, “I don’t care if you call it a spy, a human source, an intelligence seeker, gatherer or a ghost. A spy is a spy!” Video Below

Then, Pirro mentioned how Comey admitted in his application that Russia has tried to influence elections since the 1960’s. She said, “I’ll bet you never tried to wiretap Barack Obama’s campaign.”

Judge Jeanine declared, “The days of no accountability and no consequence are over. Jim, history will not look kindly on you. Bill Barr is everything you are not: A quiet professional. Somebody who understands that Lady Justice is blindfolded gor a reason.”

She concluded “The days of lies and coverup are over. Enjoy your freedom, Jim, while you’ve got it. Video Below