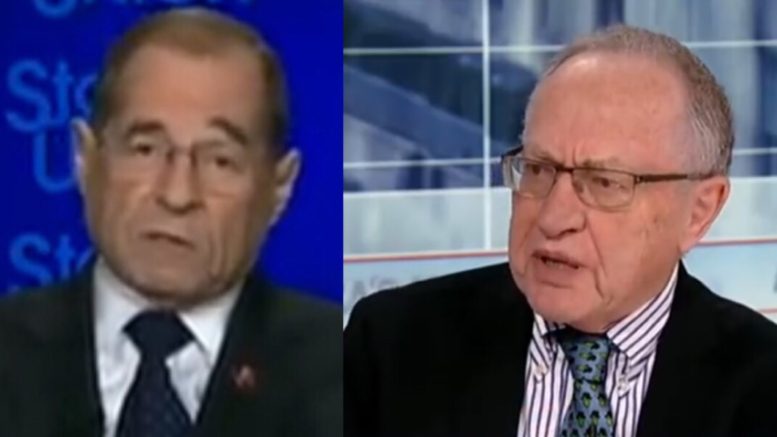 On Sunday, Nadler claimed that the Mueller report may contain “proof of bad deeds and very bad motives” during an airing on CNN with Jake Tapper.

Alan Dershowitz was eager to respond to Rep. Nadler’s comments and sounded off.

“Would he have said the same thing if Comey started talking about Hillary Clinton? Yeah, there wasn’t enough evidence to go after her, but maybe she did some really terrible, terrible things. I remember correctly when Comey said that she had engaged in ‘extreme carelessness.'”

Dershowitz pointed out that Nadler and other Democrats went after Comey when he made those remarks to the pubic, and those same Democrats said, “That’s not the role of the prosecutors to say ‘indict or not indict’.”

Dershowitz expressed, “You don’t start expressing opinions about the bad things people did– about which there wasn’t probable cause or proof beyond a reasonable doubt. There’s a double standard, it’s unbelievable!” (Continued Below)

Asked if Nadler will see the redactions, Dershowitz said, “He will see a great deal. I think the redactions will be few and far between. They’re necessary under the law.”

“The real question is: why do we have a double standard? Why were we also furious, I was certainly furious, when Comey went after Hillary Clinton, beyond saying we’re not going to indict her, and now, we want to hear everything about everybody that was in the report, even though they haven’t been indicted? Where does that double standard come from?” He asked.

Then, Dershowitz said he will be looking for two things when the Mueller report comes out and revealed that there will be two reports. (Continued Below)

“I will skim quickly the Russia matter [because] I will conclude probably that there is no evidence there. That looks like a complete exoneration. Then, the most interesting thing will be to look at obstruction of justice.” Dershowitz explained.

He added, “You’re going to have two reports. In 55 years of practicing law, I’ve never seen that by a prosecutor. Half the people on the Mueller team will say ‘the President was guilty of obstruction of justice,’ half will say there was insufficient evidence or he wasn’t guilty. And, Mueller will say ‘whoops, I couldn’t decide, so I handed it over to the Attorney General.'”

Dershowitz said he wants to read both reports and believes there won’t be any new facts. He suggested that the obstruction is based largely on what President Trump said publicly in tweets or press conferences. He asked, “Who’s ever heard of a prosecutor issuing that kind of on one hand or the other?”

Asked about President Trump’s attorney, Rudy Giuliani’s rebuttal, Dershowitz fired off, “He’s absolutely right! There should be a rebuttal, and it should’ve been issued simultaneously with the report, because the report is going to be a one sided prosecutorial report. And then, you should have a one sided defense report. That’s the way the adversarial system operates.” (Video Below)

“It’s a good thing for America to hear both sides of the issue and hear them as quickly as they can together.” Dershowitz added, “I would hope the Guiliani report comes out very quickly after the Mueller report comes out.”