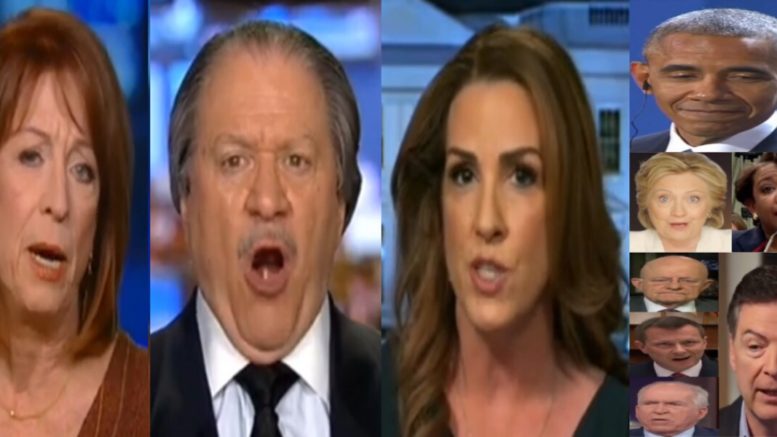 Before the Mueller report releases to the public on Thursday, former attorneys Joe diGenova and Victoria Toensing, along with investigative reporter, Sara A. Carter joined host Sean Hannity on Fox News Wednesday evening to weigh in.

This comes as Attorney General William Barr is set to hold a news conference Thursday morning where he will discuss the long-awaited release of Special Counsel Robert Mueller’s report. Barr will be joined by Deputy Attorney General Rod Rosenstein at 9:30 a.m. eastern time.

During the segment on Hannity, the crew forecasted the avalanche that’s set to strike the DC swamp.

Joe diGenova began, “The day of the news conference that James Comey gave exonerating Hillary Clinton after accusing her of a serious crimes, I called him a dirty cop. That’s what he is; he remains that today and disgraced.”

He continued, “Tomorrow morning, a clean cop, Bill Barr, the new sheriff in town, is going to hold a news conference at 9:30. By doing so, he will confront a rebellious, abusive Congress under the charge of the Democrats in the House of Representatives. He will start a process that will lead to series of federal grand juries to hold accountable all the people you’re talking about. He will conclude, without saying it tomorrow– that it all started in the White House.”

“Barack Obama knew about this from day one. He authorized it. Brennan and Clapper informed him. Everyone knows that’s where we’re headed and it’s about time, because a lot of very innocent people have been hurt, not just Donald Trump, who has been absolutely outrageously harmed by what President Obama authorized, and now, the chickens are coming home to roost, as the Reverend Wright use to say in Chicago.” diGenova expressed. (Continued Below)

Asked what’s going to happen and if she believes justice will be served for the bad actors, Victoria Toensing responded, “Justice will be served and and columnists abernathy should do another column and ask this question: ‘What did Barack Obama know and when did he know it? How many meetings were there at the White House about this Russia investigation?”

Toensing pointed out the meeting on January 5, 2017 that included: former president Barack Obama, Vice President Joe Biden, former Deputy Attorney General Sally Yates, and former FBI Director James Comey. It was discovered in an email that Susan Rice wrote “to herself” and tried to cover up.

The meeting at the White House discussed the Steele dossier and Russian collusion, but curiously Rice stressed that Obama said every aspect should be handled “by the book.” Yet, Peter Strzok told his FBI lovebird Lisa Page, not to worry about Trump being elected because “We’ll stop it.” (Continued Below)

Hannity said there is an avalanche coming and asked to extent that she can explain what is coming, Sara Carter affirmed and replied, “There is an avalanche coming in the next few months, and it is going to be huge. There are a number of indictments that are on the way. There’s going to be a very serious investigation into what had happened and what transpired since the Hillary Clinton investigation by the FBI.”

She added, “[It will dive deeper] all the way through into the origins of the very beginning of the investigation into then-candidate Trump and those within his campaign. And, I agree with Victoria and Joe that it’s going to lead all the way back to the White House– and I’m talking about the Obama administration.”

Hannity suggested that Peter Strzok and Lisa Page brought it all the way into Loretta Lynch’s office and that it was a circling firing squad.

Related: Rep. Collins Discloses Why Lynch Is Now At The Center Of Investigative Crosshairs: ‘Loretta Lynch Has Some Explaining To Do’)

Before concluding the segment, Victoria yelled, “Get lawyers! Get lawyered up!” [Emphasized] (Video Below)

Here is a thought to ponder: if firing Comey obstructed justice, why wasn’t Deputy Attorney General Rod Rosenstein, who recommended the firing, also placed under investigation?

Just an FYI: former FBI Director James Comey, after being fired, sent a letter to agents and friends following President Trump firing him.

“I have long believed that a President can fire an FBI director for any reason, or for no reason at all,” he wrote, according to CNN. “I’m not going to spend time on the decision or the way it was executed.”