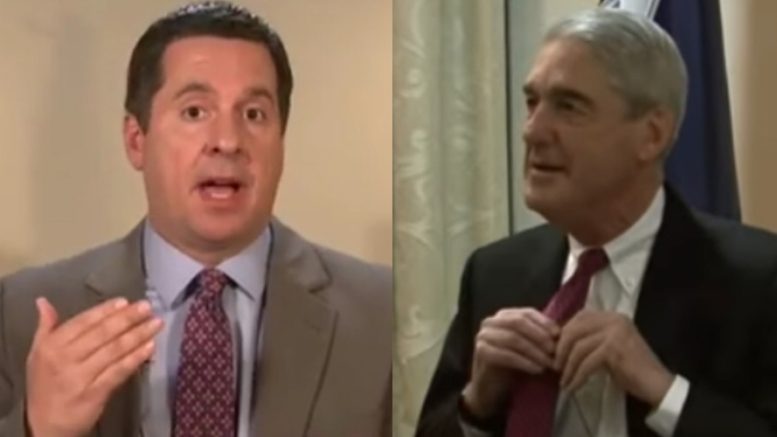 The criminal referrals sent from Devin Nunes reportedly includes: conspiracy, going beyond the 8 individuals, and looking into the Steele dossier origins.

(Related: Devin Nunes Drops Hints On Who His Referrals Involve: ‘If I Gave You Seven Guesses, You’d Probably Get The Five’)

While speaking with Laura Ingraham however, Nunes disclosed three specific areas of a “set up” he’ll be looking for in Mueller’s report on Thursday.

“The first is involved with General Flynn. General Flynn was supposedly entrapped, meeting with a Russian woman. I want to know what really happened there, because we’re just now finding out about this, and we need a lot more information on what General Flynn was doing.” Nunes expressed, “It’s a big deal if somebody within our intelligence agencies were accusing a three star general of having some type of Russian fling. It’s serious stuff, and I want to get to the bottom of that.” (Continued Below)

Nunes said the second big question he has pertains to Joseph Mifsud and explained that Mifsud was how the “whole investigation started.”

He explained that Fusion GPS was the company working for the Clinton campaign and the Democrats. “And somehow Glenn Simpson meets with them before and after…. and these are Russians that he’s doing work for?”

Nunes said, “If Mueller can’t get to the bottom of this and answer for the American people, I don’t know what the report was really worth.”

(Related: Judge Jeanine SHREDS Comey Amid His Criticism Of Barr: ‘Enjoy Your Freedom, Jim, While You’ve Got It’)

The Congressman noted that whatever happens on Thursday, Donald Trump is a free man; there’s no evidence whatsoever of collusion.

“They tried to frame him on obstruction of justice, and they didn’t get him on that either, even though they tried to frame him. This thing is over on Thursday for the American people, but the Democrats in Congress are going to continue to try and investigate, and my guess is, their friends in the media will play a part in that.” (Video Below)