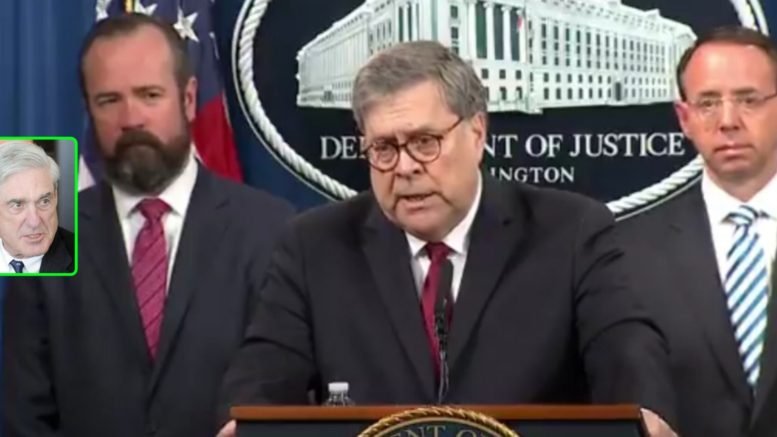 Attorney General William Barr held a news conference Thursday morning to discuss the Mueller report before releasing it to the public and Congress.

Barr affirmed once again that Special Counsel Robert Mueller found no evidence of collusion between members of the Trump campaign and the Russians during the 2016 presidential election, and in announcing the conclusion, the left wing media hacks were upset.

The Attorney General used the DOJ appearance to defend his handling of the report, amid criticism from congressional Democrats. He rejected the suggestion he’s trying to protect President Trump, and then swatted down a question about whether it was strange that Mueller himself was not there.

A reporter asked Barr, “There’s a lot of public interest in the absence of the special counsel and members of his team. Was he invited to join you up on the podium? Why is he not here… this is his report obviously that you’re talking about today?”

Barr fired back, “So was I, it was a report he did for me as Attorney General.”

“He is required under the regulation to provide me with a confidential report. I’m here to discuss my response to that report and my decision, entirely discretionary to make it public– since these reports are not supposed to be made public. That’s what I’m here to discuss.” He added. (Continued Below)

The Attorney General was joined by Deputy Attorney General Rod Rosenstein as he outlined the findings from Mueller’s investigation and explained their process for review and their decisions to redact certain material in the report.

“After nearly two years of investigation, thousands of subpoenas, and hundreds of warrants and witness interviews, the Special Counsel confirmed that the Russian government-sponsored efforts to illegally interfere with the 2016 presidential election but did not find that the Trump campaign or other Americans colluded in those schemes,” Barr said, adding that Americans “should be grateful” for the findings.

He said he will release that redacted version to Congress at 11 a.m. ET Thursday, describing the redactions as “limited.” It will then be posted publicly. (Video Below)

On special counsel Mueller's absence at presser, AG Barr says: “It’s not [his report], it’s a report he did for me as the attorney general…I’m here to discuss my response to the report.” https://t.co/3ZKq6CwMeV pic.twitter.com/MdooGP6wDs