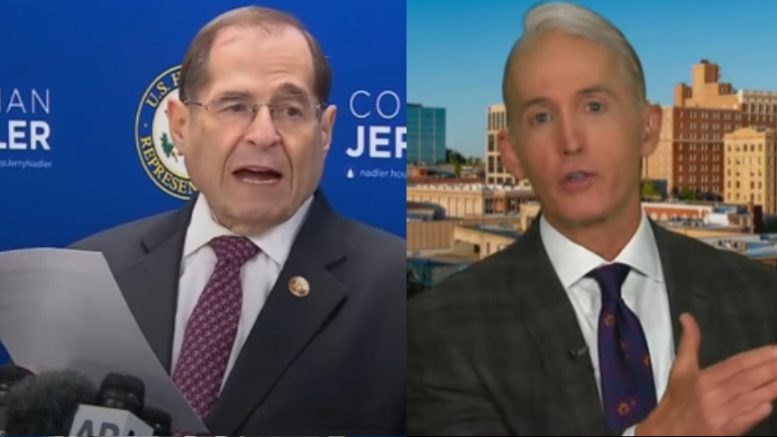 Former South Carolina Republican Congressman and now Fox News contributor, Trey Gowdy, joined host Neil Cavuto on Fox News Friday where he weighed in on the aftermath of the Mueller report and the games Democrats are engaging in.

Gowdy was among a small number of Republicans who believed that the Mueller report should not have been made public because of the fact that –it would not have resolved or changed anything.

Gowdy explained that Democrats want to drag this out and have it last as long as they possibly can. “Jerry Nadler should know that it is against the law for Bill Barr to share everything with him. You cannot give Grand Jury material. Bill Barr has already offered to let a select number, and the fewer that see it, the less likely it is to leak.”

Gowdy switched gears and said the Department of Justice doesn’t do research papers. They either issue indictments or they do not.

“Clearly [Mueller] didn’t have enough evidence on collusion, and what I would say in respect to Mueller, is if you have enough on obstruction, then charge him. Then, let a jury of 12 decide whether or not you’re evidence carries the burden of persuasion. What we have now is a hung jury. He’s gonna lay out all the evidence he has, there’s no resolution, half the country is gonna think the President obstructed justice, the other half is going to think he didn’t. There’s no resolution, so why issue the report?” Gowdy asked.

He noted that President Trump is not above the law, but he’s not below it either. “Find me another American, other than what Jim Comey did to Hillary Clinton that has had an oppo-research paper investigated by the Department of Justice, no charges and then disseminated.” (Continued Below)

Asked he thought Mueller set it up so that Congress could take action, Gowdy said, “This is a counterintelligence investigation that became public. It is a criminal investigation where there is a presumption of guilt.”

He continued, “You’ve got Adam Schiff saying had evidence before he interviewed a single witness. You have 60 House Democrats that voted to move forward with impeachment before Bob Mueller uttered a single, solitary syllable. So, there’s nothing normal about this! Image if you were accused of treason. Where’s the line of vigorously defending yourself and crossing the line over into obstruction.”

He asked Neil how he would react to leaks on the front page of The Post and The New York Times. “There’s nothing traditional about his case, and therefore the President’s reaction was not traditional. I’m not defending it, but I’m saying, I’d rather have his facts, than a the prosecution’s facts. If you feel good about your obstruction case, then charge him.”

In reference to Democrats crying that Trump “thought” about firing Mueller or shutting down the Mueller investigation, Gowdy added that he hopes we have not gotten to the point where “thinking about about doing something is a crime in this country. I hope that’s not where we are. Discussing what your options are with your advisors.”

“You’re being charged with treason. This is the most non-traditional investigation I have ever seen. Everything is made public, whereas in the real world, none of this would be made public. You’re accused of treason– how vigorously are you going to defend yourself Neil?” He asked. (Video Below)

“I would defend myself pretty vigorously when it’s a third legal, a third political, a third communications. This was a political investigation, or part of it was political from day one. And when you have 60 people saying you should be impeached before Bob Mueller has issued a single syllable of his report, then this is not a legal investigation. It is a quasi-political one, and he responded accordingly.” Gowdy concluded defending President Trump.