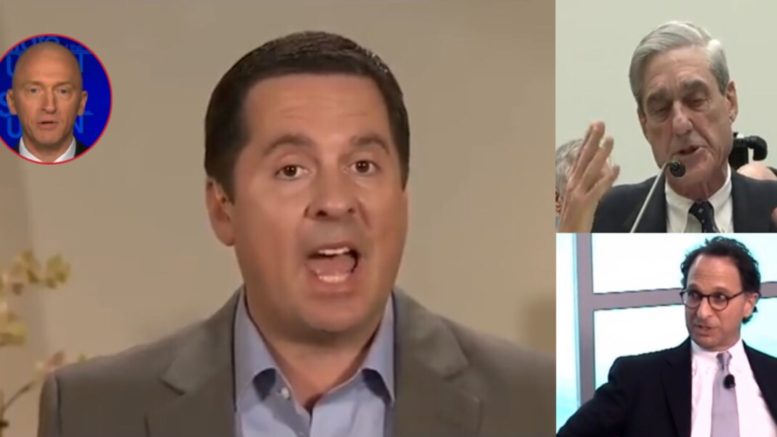 Nunes explained that a very important revelation happened as the “Mueller dossier” was released to the public.

The California Congressman said the Mueller report is not worth anything, and that “you would have gotten more from reading the House Republican report from 13 months ago.”He broke it down and explained why.

“When you look at what happened today, remember when we talked a lot about the scope memo? What were the directions given to the Special Counsel?” He asked.

He said that the dossier came from political opponents– the Clinton campaign fed right into the FBI, directed to the Special Counsel to go investigate what was in the infamous Steele dossier. (Continued Below)

“That was the only thing that was of relevance in today’s 450 page report.” Nunes noted.

Hannity asked, “So you’re saying they used unverifiable, Russian paid lies by Hillary as their roadmap– the Mueller team, partisans, the ones that were hanging out at the Hillary victory party and worked for Hillary?”

Nunes responded, “Yes, so the same dossier that was used to get the FISA warrant on Carter Page, that many of the dirty cops on the Mueller team handled– Rosenstein directed them to use that dirt, the dossier. I think it makes up the bulk of the scope memo that we have still yet to be able to see.” (Continued Below)

Asked what’s next and what does he see coming, Nunes said, “We have to have equal justice under the law. I am so happy that Attorney General William Barr is being an adult. He’s being very factual, he’s driving the media absolutely nuts.”

“But we have to have real action taken against these people who did this. Because we can’t afford for this to ever happen again in our history. Step back and think about this: the most power intelligence operations ever built in the history of the planet– tens of billions of dollar a year that are suppose to keep this country safe, were turned and used on a political campaign. That should never ever happen in this country” Nunes concluded.

He further tweeted, “As I said tonight with ⁦@seanhannity⁩ don’t waste your time reading #MuellerDossier instead read a real report done by House Intel Committee Republicans – finished over a year ago – Cost 30M less and doesn’t read like a really bad Russian Spy novel!” (Video Below)

As I said tonight with ⁦@seanhannity⁩ don’t waste your time reading #MuellerDossier instead read a real report done by House Intel Committee Republicans – finished over a year ago – Cost 30M less and doesn’t read like a really bad Russian Spy novel! https://t.co/jSnAigfnnZ