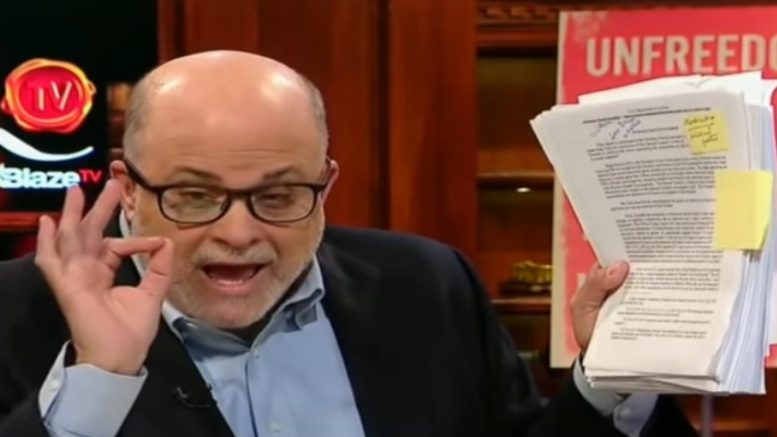 Mark Levin broke his silence on the Mueller Report in a recent appearance on Fox & Friends.

Levin was visibly angry, primarily in regards to “Volume 2” of the report that “everyone is focused on.” He said, “This report, Volume 2, doesn’t have a syllable of legal significance. There’s not a syllable of law in it. It doesn’t matter what McGahn said, or what the President said. None of it’s been tested in a court of law.”

Levin said that’s why Mueller and his team wrote Volume 2, which is because it had never been cross-examined and they knew the media would obsess over it.

He then went on to declare, “This is an op-ed. This is a 200-page op-ed. That’s all this is. No prosecutor, who wouldn’t want to be disbarred, would ever produce anything like this.”

Related Article: Nadler Subpoenas The Full Mueller Report, Gowdy Responds: ‘He knows It’s Against The Law For Barr To Share [It] With Him’

Levin stated that just because the prosecutor wrote what someone else said, doesn’t necessarily mean that it’s true,  because it only includes one side to the story, and they can pick and chose whatever fits their narrative. Video Below

He said, “That’s why we have a court of law. That’s why prosecutors, damn it, are not supposed to write essays like this.”

Further, he stated, “Volume 2 is crap! Volume 2 was written for slip-and-fall lawyer Nadler, slip-and-fall lawyer Schiff. That’s why he wrote it. He knew the media would run with it.”  Then after citing how no one on the left was interviewed in the Russia probe, Levin concluded, “This is a hack job!” Video Below