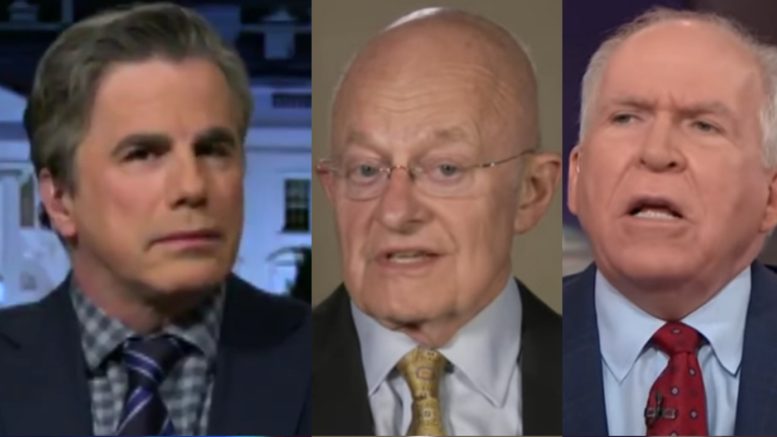 On Saturday, Tom Fitton joined Judge Jeanine to discuss the latest happenings as a result of the fallout from the Mueller Report.

Judge Jeanine brought up both James Clapper and John Brennan, who are both trying to still push the collusion concept, despite Mueller’s report virtually clearing the President of any wrongdoing.

As part of his reaction to the Mueller Report, Clapper claimed that although Mueller didn’t find “active collusion,” there was still “passive collusion,” as he called it.

Brennan said in his response, the information displayed in Mueller’s report on both “obstruction” and “collusion” was extensive.

Fitton slammed leftist responses, like those of Clapper and Brennan, when he said, “Well, they’re trying to hold on to, keep propped up their hoax. It was a knowing lie, in my opinion. There was never any Russian collusion.”

He continued, “And they concocted pre-textual intelligence reports, working also with the Clinton campaign as part of that, with an illicit and unprecedented spying campaign.” Video Below

Fitton then brought up that it wasn’t just a DOJ and FBI scandal, but it also involved other intelligence agencies, including the NSA, CIA, the Office of Director of National Intelligence and the State Department.

He went on to say that there should have never been a Mueller Report, which he labeled as “another abuse of power by the Mueller Special Counsel operation, designed to defame and politically hamper the President, as opposed to shed light on anything substantial.”

Fitton concluded that if he were Trump, he would walk over to the FBI and “launch a criminal complaint.” He added, “It’s that bad. He’s a crime victim, judge. And Peter Strzok and people like that who abused their office to target him for political purposes. They victimized him and many others and there’s gotta be criminal accountability there.” Video Below

“There should have never been a Mueller report, as far as I’m concerned. This monstrous report is just another abuse of power by the Mueller special counsel operation designed to defame and politically hamper the pres. as opposed to shed light on anything substantial.”-@TomFitton pic.twitter.com/AoswZBhxR4