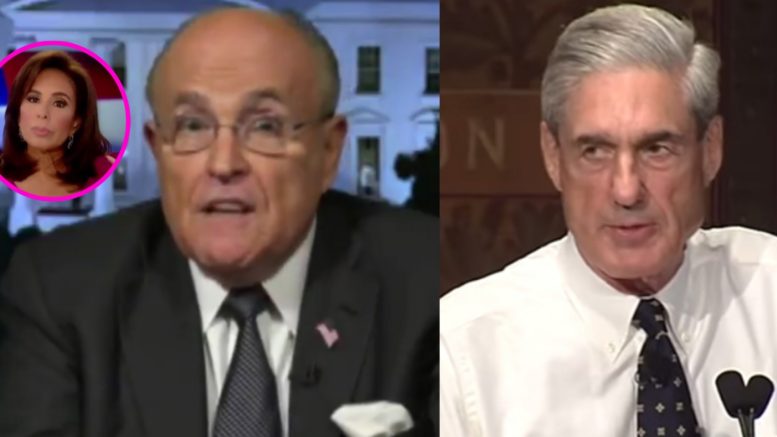 While appearing on Judge Jeanine’s program, Rudy Giuliani pointed out some core issues he found while analyzing the Mueller Report.

Giuliani said he and fellow lawyers read the report in the DOJ’s SCIF (Sensitive Compartmented Information Facility), on Tuesday where he initially found an issue with the entire Volume 2 section of the report.

Giuliani revealed that he and his fellow attorneys came to an agreement that Volume 2 is a “totally illegitimate document.”

He stated, “It is a ridiculous burden of proof. You gotta prove your innocence? I thought we were in a America, or maybe England, or even Rome.”

Related Article: Dan Bongino Explains Why Hillary Has Remained Silent On The Mueller Report: ‘She Has A Lot To Hide’

Giuliani said he is glad they wrote the report that way, however,  because it proves the notion that it was a ‘Witch Hunt’ is absolutely right. He questioned, “When has any human being been required to prove their innocence? How can you prove a negative?” Video Below

Rudy continued, “It also means they assumed him guilty. And if you read that report, that’s like a one-sided view as if they proved all of that stuff.”

He went on to declare, “They didn’t prove any of it, judge. And they can’t prove half of it. And half of it is false…like a lie!”

Giuliani said you’d be best off burning the section about Michael Cohen because, as he stated, “Does anybody believe Michael Cohen?” Video Below