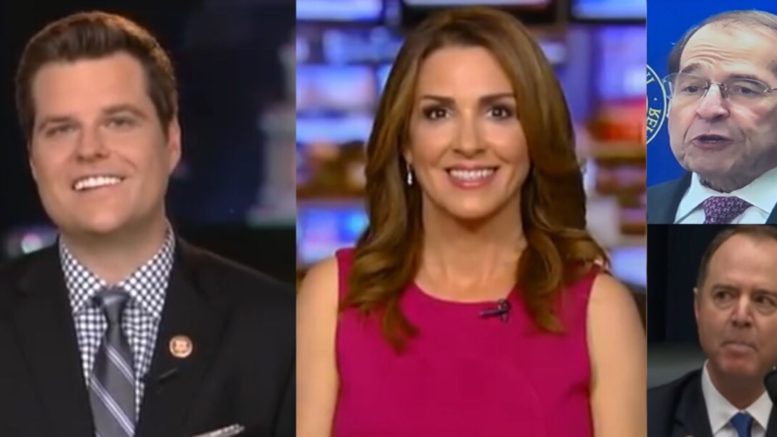 Investigative reporter Sara A. Carter and Congressman Matt Gaetz (R-FL) joined host Jesse Watters on Fox News’ “Watters World” Saturday evening where they weighed in on democratic hysteria after the release of the Mueller report.

The panel started off with a few jokes, but it turned serious when they discussed how the 2nd half of the Mueller report shows how it was in cahoots with the media by citing their reports. Surprisingly, this very same thing happened with the Steele dossier. It was leaked by former British spy, Christopher Steele, circulated throughout the media, then used to obtain FISA warrants– essentially to spy on the Trump campaign.

Asked about the fallout of the Mueller report and calls for impeachment against the President, Rep. Gaetz explained that there seems to be a problem within the Democratic party currently as freshmen representatives have taken over the base and now driving the energy. He named Alexandria Ocasio-Cortez (D-NY), Rashida Tlaib (D-MI), Ilhan Omar (D-MN), and Ayanna Pressley (D-MA).

But, as the radical left is drumming their base from the second half of the Mueller report, Gaetz noted that there was a weird “feedback loop” between the Mueller team and the media. “The Mueller report cites the media 125 times. I don’t know how they had time to investigate anything. It seems like they were spending all their time watching CNN and reading The New York Times.” Gaez suggested.

(Related: Mark Levin Defiantly Holds Up The Mueller Report & Vents His Thoughts On It: ‘This Is A Hack Job!’)

He also pointed out that the media is referenced in volume 1 of the Mueller report at half the rate, versus volume 2, which spins up an obstruction of justice “theory”, and relies heavily on public reporting “rather than their own investigative work.” (Continued Below)

Sarah Carter weighed in and said, “The leftwing or the mainstream or whatever we want to call it media, those who reported all these erroneous lies should be ashamed of themselves, and they should also be embarrassed. They were used; they were stooges for people in the Obama administration that leaked a disinformation campaign that literally targeted the President of the United States.”

“Their job is to seek out the facts, report those facts, even if they don’t like President Trump,” Carter advised. (Continued Below)

Before switching gears to serious investigations surrounding the media and others, Jesse Watters said that the media did Putin’s bidding as they kept the Russia narrative alive by sowing discord and animosity.

But as their collusion delusion came to a screeching halt, they are holding on to what hope they have through Reps. Jerry Nadler (D-NY) and Adam Schiff (D-CA)– to take the torch from Mueller and run it across the impeachment line. “[Nadler] doesn’t have the credibility. He’s not moderate enough. And I don’t think he can sell a “not-not guilty” attempted obstruction charge, the way you can sell collusion.” Jesse said.

(Related: Swalwell Claims Trump Is A ‘Double Digit Obstructer’, Calls On Barr To Resign For Not Recusing Himself)

As President Trump has announced it’s time to investigate the investigators, Jesse said he doesn’t believe the media is going to fairly and accurately report instances of abuse of power that happened in the last administration.

“I certainly hope you’re wrong, and the only reason I say that is because there are going to be numerous investigations. And, I don’t think they’ll be able to walk about from it.” Carter expressed. “Once the information comes out from the Michael Horowitz’s report… remember that’s going to be a very narrow scope investigation.” (Video Below)

She explained that the Inspector General’s report will be focused on the FBI and the DOJ malfeasance within the agencies. Along with more investigations from the Attorney General and John Huber.

“What we’ve seen is an extraordinary abuse of power. I think the American people are well aware of what’s going on here. I also think at some point the media is going to have to take a step back, and they are going to have to assess what they’ve done. Because we’ve seen the ratings drop and people are going to stop reading those papers if they don’t feel they are being serviced well with the truth.” Carter warned.

Gaetz announced another little nugget that the Inspector General is working on, which is the corruption that existed between the media and members of the FBI. “Remember, members of the mainstream media were giving concert passes and athletic tickets and other incentives in the FBI to leak to them,” Gaetz mentioned, adding that the mainstream carried the lies to millions of living rooms around the country.