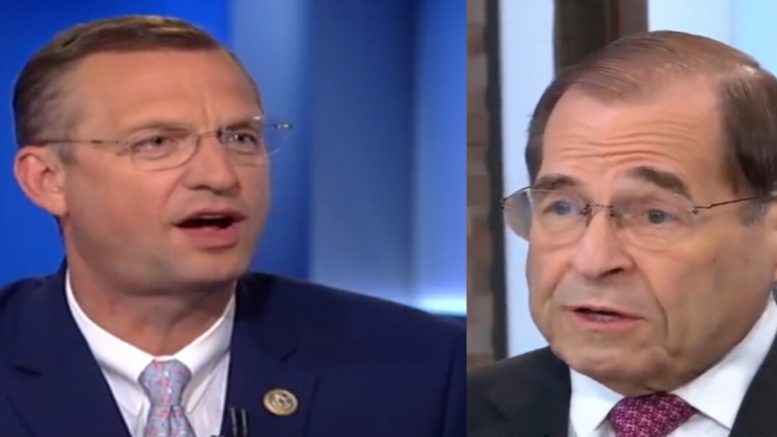 Congressman Doug Collins (R-GA) is fed up with Democrats grandstanding and spinning narratives to drum up their base after the release of the Mueller report.

One accusation that is being tossed around from Chairman of the Judiciary Committee, Jerry Nadler (D-NY), is that the Mueller report “left a roadmap for ‘Congress’ to decide whether President Trump committed obstruction of justice.”

Rep. Collins stated that that Chairman Nadler is promoting a “wildly inaccurate narrative” about what Special Counsel Robert Mueller stated in his report to the Attorney General.

Collins wrote a letter to Nadler on Monday and cited two instances where the Judiciary Chairman said on “Good Morning America” that “The…… special prosecutor, made very clear that he couldn’t reach a determination on obstruction of justice… but that he laid it out… for Congress to do it.”

Nadler also said on the same show, “The special prosecutor invited Congress to look into that.”

Collins wrote that is not what Mueller said in his report and countered: “However, a plain reading of the Report does not at all indicate– let alone make ‘very clear’ as you claim– the Special Counsel intended for Congress to decide whether President Trump obstructed justice. In fact, it is the exact opposite.” (Continued Below)

Collins continued, “I trust by now you have thoroughly read the entire Report from the Special Counsel’s 22 month investigation. As such, you would recognize the passages in question on page 8 of Volume II, are a summary of a lengthier legal discussion on pages 168-180 of Volume II, at the very back of the entire Report. The passages are not, in fact, an invitation for Congress to pick up where the Report left off.”

“As you are certainly aware, the legislative branch writes the laws and the executive branch enforces them. This simple maxim from Civics 101 has become a casualty of false claims Special Counsel Mueller asked Congress to decide whether President Donald Trump obstructed justice. The Special Counsel did not say that– and would not say that–because Congress is neither a prosecutorial nor judicial body. Those responsibilities lie under the purview of the executive and judicial branches, respectively.” He wrote.

Collins laid out the material in the report where he found sufficient evidence to argue Nadler’s claims and they are under “discussion” in the letter below. He added, “In other words, Mueller concluded Congress may write obstruction of justice laws that apply to the President, even when the President is exercising facially lawful Article II powers, if those powers are exercised corruptly. That is the crux of the Report’s summary on page 8– not the Special Counsel differing his decision-making authority to Congress.” (Continued Below)

“The absence of any statement asking Congress to serve in a prosecutorial capacity in an obstruction of justice case should not be surprising, because that is not Congress’ role– it is the role of Department of Justice. While everyone agrees that Congress has impeachment authority, this is not what the special counsel is addressing in this context (which is perhaps why you have not dared claim that this Report invites you to impeach the President).” Collins continued.

He pointed out Attorney General Barr said in this April 18, 2019 press conference that Mueller did not indicate that his purpose was to leave the decision to Congress, and said, “[Barr] was exactly right” when he said “we don’t convene grand juries and conduct criminal investigations” to let Congress make prosecutorial decisions. Barr further stated the job of prosecutors is “to determine yes or no was alleged conduct criminal or not criminal.”

Collins also wrote in his letter to Nadler, “Your deliberate misrepresentations to the American public threaten the fundamental separation-of-powers doctrine, are dangerous and need to stop. The special counsel’s regulations– written by the Clinton Justice Department– require only for a special counsel to ‘provide the Attorney General with a confidential report explaining the prosecution or declination decisions reached by the Special Counsel.'”

He noted that Barr has willingly offered to share information to Nadler in accordance with the law, but Nadler has refused. “The Attorney General has gone far beyond what the regulations require, and your continued slander of the Attorney General– while perhaps politically opportune– is wrong and also must end.” Collins demanded.

“Moving forward, I urge you to be accurate in your claims before the American public and encourage you to take the Attorney General up on his offer to read the full report. Given the stakes, dismissing this offer and refusing to review the report you demanded as soon as possible amounts to dereliction of duty.” He concluded. (Continued Below)

Collins posted his letter on Twitter Monday and said, “Claims #MuellerReport punts the special counsel’s work to Congress are wrong. The report analyzes Congress’s Constitutional authority to legislate–It doesn’t upend the separation of powers by calling Congress to continue a completed DOJ investigation.” 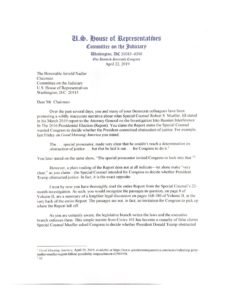 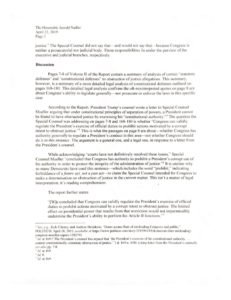 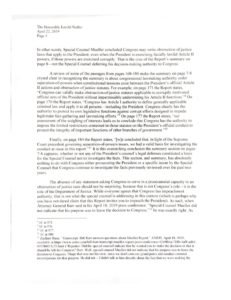 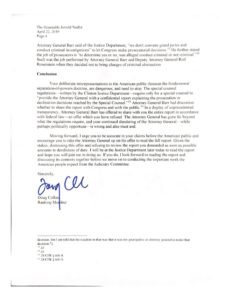 (Related: Rep. Collins Discloses Why Lynch Is Now At The Center Of Investigative Crosshairs: ‘Loretta Lynch Has Some Explaining To Do’)