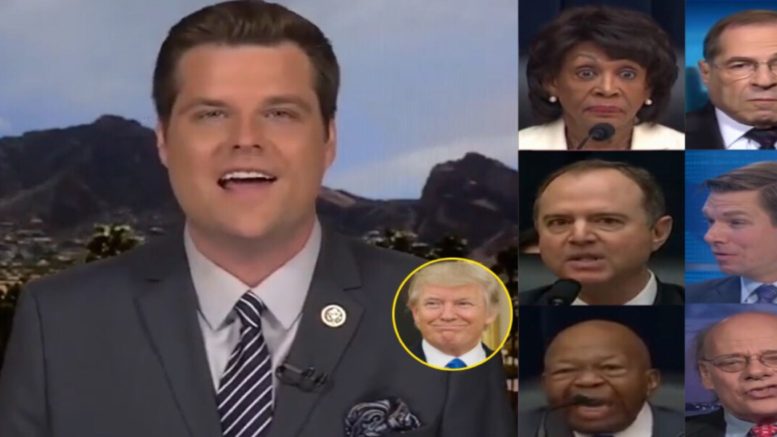 Congressman Matt Gaetz (R-FL)  joined host Martha MacCallum on Fox News where he weighed in on the findings of the Mueller Report and what it means for the President.

He laid out three reasons why there’s no criminal opportunity prosecution against President Trump.

The Russia collusion hoax is dead, but Democrats are now using volume 2 of the Mueller report to go after the President for “obstruction of justice.”

Rep. Gaetz defended President Trump and explained why the Democrats will fail at their tactics. “First, you can’t unwind his legitimate actions from Article 2 powers. That was Mueller’s own problem. You couldn’t figure out where obstruction would have begun, and where Article 2 would have ended.”

He noted that Mueller knew that by advancing his “improper investigation” that it would hurt the country.

“[Trump] was trying to wind up the investigation legitimately so he could go and be the President and the leader of the free world, nothing wrong or criminal about that, and it’s also evident that most of what the President was doing was in public. That’s not how people commit crimes.” Gaetz said referring to how the Commander in Chief has bigger issues on his plate, such as dealing with North Korea. (Continued Below)

Asked why he thinks the Mueller report is aggressively written where it talks about the Trump Tower meeting, Gaetz responded, “Well, there’s no meeting of the minds, right? Just because two ships are both sailing in the same direction, it doesn’t mean they’ve agreed with one another to charge the same course.”

He explained that Donald Trump Jr. wanted bad information about Hillary Clinton to be in the public sphere, and Russia wanted the same thing. “But there was no agreement for them to coordinate or collude or conspire to make that happen. That’s why they were unable to charge Donald Trump Jr,” he said.

“If there was a meeting of the minds, if there was evidence to support those claims, then I think you would’ve seen a criminal indictment,” Gaetz added. (Continued Below)