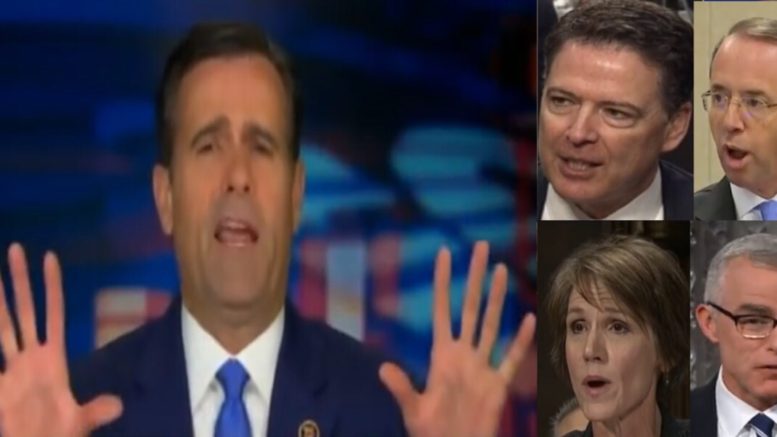 Rep. John Ratcliffe (R-TX), who serves on the House Judiciary Committee, joined host Jason Chaffetz Monday evening on Fox News where he weighed in on the aftermath of the Mueller report and the Steele dossier.

This comes after it is now widely known that the Trump campaign did not collude with Russia.

Two weeks ago when Attorney General William Barr testified on Capitol Hill before the Senate Appropriations subcommittee, he announced that he believes “spying did occur” on the Trump campaign in 2016, and he vowed to review the conduct of the FBI’s original Russia probe.

Barr announced, “I think spying did occur. The question is whether it was adequately predicated. I think it’s my obligation. Congress is usually very concerned with intelligence agencies and law enforcement agencies staying in their proper lane.” Barr also noted that “spying on a political campaign is a big deal.”

Asked about spying by the Obama administration and “probable cause”, Rep. Ratcliffe said there was a problem.

“Trey Gowdy and I are the only two Republicans that had the opportunity to see that ‘probable cause’ evidence– to see all of those FISA applications in unredacted form and they centered around something called the ‘Steele dossier.'” Ratcliffe explained. (Continued Below)

The Texas Congressman said the Steele dossier was entirely false and fake, more so now that Robert Mueller in his report, also admitted the dossier was garbage.

Related: Graham Reacts As Barr Signals A Review Of Intel Community Conduct: ‘None Of This Adds Up’)

“Remember the Steele dossier said Carter Page was at the center of a well-developed conspiracy between the Trump campaign and the Russia government,” Ratcliffe said. ” Carter Page wasn’t charged, he was never going to be charged. The idea that he was a Russian agent was a joke.” (Continued Below)

Then, Ratcliffe said the people that verified and signed off on the Steele dossier to the FISA courts have some “explaining to do” because they lied to the court.

Ratcliffe said the FISA court sees in big bold letters the words “verified application” when they receive the documents to allow a warrant “to spy.”

“Jim Comey and Sally Yates and everyone else that signed off on those are verifying to the court what’s in there. And they are verifying that Christopher Steele was a credible source. They’re verifying that the Steele dossier had been collaborated. None of that was true. The folks that signed off on that– the court can only know what they are told, and they weren’t told that Christopher Steele was out to get Donald Trump. They weren’t told that the Steele dossier was paid for by Hillary Clinton.”

He noted that the court was at the mercy of the people who verified the dossier and the Attorney General is going to look into the matter and hold people accountable. (Video below)