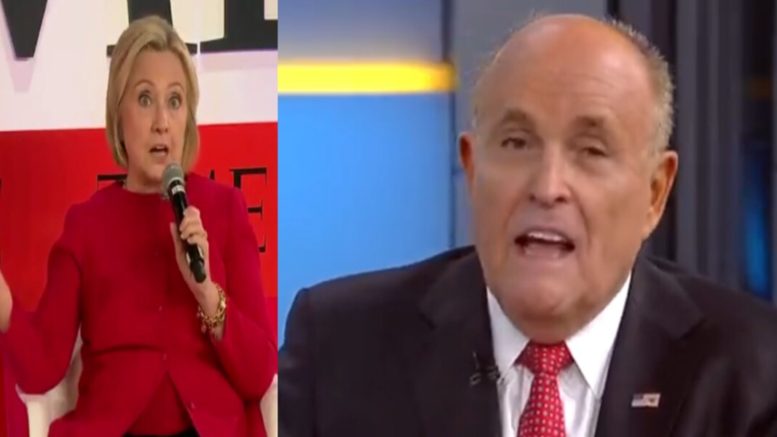 President Trump’s attorney, Rudy Giuliani, joined “Fox and Friends” Wednesday morning where he fired back at Hillary Clinton after her recent remarks on the Mueller report.

Giuliani’s response came after Clinton spoke during the “TIME 100 Summit” in New York on Tuesday, in which she claimed Trump would have been indicted by the Special Counsel if he weren’t President.

Rudy Giuliani flipped the tables on Hillary Clinton after she claimed that President Trump would have been indicted by Robert Mueller if he weren’t in office, and he made it know that there used to be a policy of “you cannot indict a Clinton”, but that is all about to change.

(Related: Hillary Clinton Breaks Her Silence On The Mueller Report, Says Trump Should Have Been ‘Indicted’)

“Collusion delusion. No collusion. If you are innocent on the underlying crime, then everything they are talking about is an effort for him to defend himself. If I tell somebody that I’m innocent, please, testify on my behalf and say what happened, am I obstructing justice or am I defending myself and serving justice,” he added. (Continued Below)

Giuliani went on to say that the real question now is how the investigations into Trump and his campaign started in the first place, noting it’s time to “investigate the investigators.”

“How this ever got started in the first place is the next investigation. And Ms. Clinton better get a lawyer,” the former Mayor of New York City urged. [Emphasized]

Giuliani also noted that Attorney General William Barr will follow up on how the investigation began, though admitted he has zero inside information.

Related: Rudy Giuliani Points Out Critical Issues He Found Within The Mueller Report: ‘Half Of It Is False’)

He said of Barr, “I have no inside information, zero, other than the fact this is a man who believes in justice. If you believe in justice, this can’t help but anger you and frighten you. If this can be done to the President of the United States, a frame-up like this, it can be done to any of us.”

(Related: While Lashing Out At His Opposition, Trump Unveils His Plan If Dems Try Impeaching Him: ‘Head To The SCOTUS’)