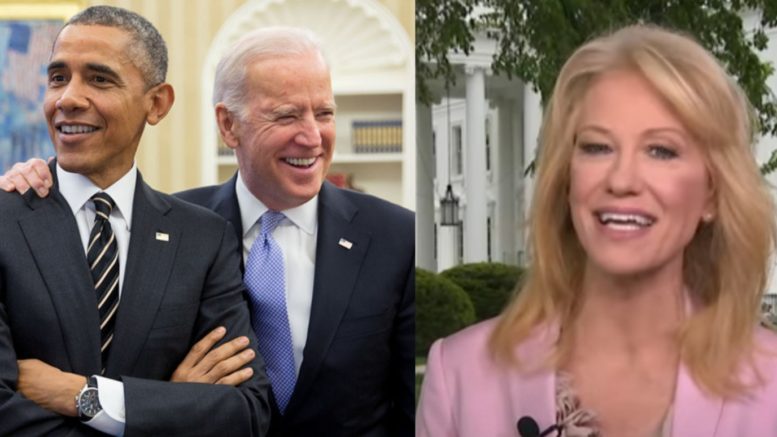 Joe Biden is expected to announce his Presidential bid on Friday, and Kellyanne Conway says it may be coming at the right time for the former Vice President.

Conway initially slammed the sloppy roll out of Biden jumping in the race, citing his apology video for inappropriately touching women and sniffing their hair. But, as Bernie Sanders is the clear Democrat front-runner, Kellyanne says now is the perfect time for Biden to jump in the race and establish himself as an alternative.

Conway said, “I think Biden’s timing actually benefits him because the Democrats seem really desperate to find an alternative to Bernie Sanders, who’s the clear announced front-runner right now in the polling and on the ground.”

“Bernie Sanders has a lot in common with Donald Trump, which is he doesn’t care what his party thinks about his candidacy,” she continued. “He’s connecting directly with the voters. He’s raising small dollar amounts.”

Kellyanne declared, “The only difference between Bernie Sanders and Donald Trump is Bernie Sanders’ ideas are terrible for America.”

She went on to say that although Biden will likely be seen as an alternative to Bernie Sanders, those the choice of Bernie vs. Biden will actually go against what Democrats and other candidates have been pushing for.

Kellyanne said, “Old, white, male, career politicians like Bernie Sanders and Joe Biden is not exactly what the Democrat Party had in mind for 2020, when they’re running all these different folks who are talking about identity politics and what makes them different.” Video Below