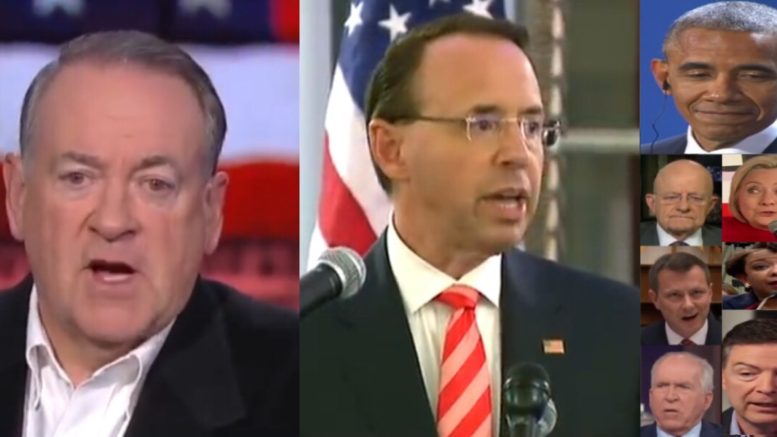 Rosenstein defended his handling of the special counsel’s investigation and called out former FBI Director James Comey while accusing the Obama administration of misleading the American people on Russia.

While speaking about the Mueller report, Rosenstein said, “I did pledge to do it right and take it to the appropriate conclusion. I did not promise to report all results to the public because grand jury investigations are ex parte proceedings.”

“It is not our job to render conclusive factual findings,” he continued. “We just decide whether it is appropriate to file criminal charges.”

Rosenstein also ripped the Obama administration for its handling of Russian meddling and the subsequent investigation: “The previous administration chose not to publicize the full story about Russian computer hackers and social media trolls, and how they relate to a broader strategy to undermine America.”

Further, he discussed how Comey handled the investigation, and he made it clear that he was not happy with how the former FBI director handled it. (Continued Below)

Former Arkansas Governor, Mike Huckabee responded to Rosenstein’s rare public comments Friday on Fox News and declared, “I thought it was a soft way of him saying basically there was a coverup!” [Emphasized]

“They knew the Russians were attempting to influence the election and attempting to hack the election, but they didn’t fully disclose that to the American people, and they certainly didn’t disclose it to the Trump campaign,” he added. (Continued Below)

Huckabee also said they tried to set a trap for his campaign, which ultimately failed because they didn’t take the bait, but added, “I thought it was an unusually candid moment for Rosenstein to say what he did yesterday.”

Huckabee noted that Robert Mueller had only one responsibility for his investigation: “to find out whether Donald Trump and or his campaign colluded with Russians. On that one thing that he had to do, he found that there was no collusion, and that was overwhelmingly clear on his report.”

He believes that all of the other stuff in the report was not part of his mission. “[Mueller] added that because I think there were people who were working for him who said ‘we gotta find something, we spent too much money, we’ve got too much invested and just came away with a goose egg.”

The former Arkansas Governor suggested, “I really believe that if Americans would step back and take their partisan hats off and try to look at this objectively, they would say that the President was in fact, exonerated. Because the only thing he was being investigated for was collusion with the Russians, there wasn’t any. None.” (Video Below)