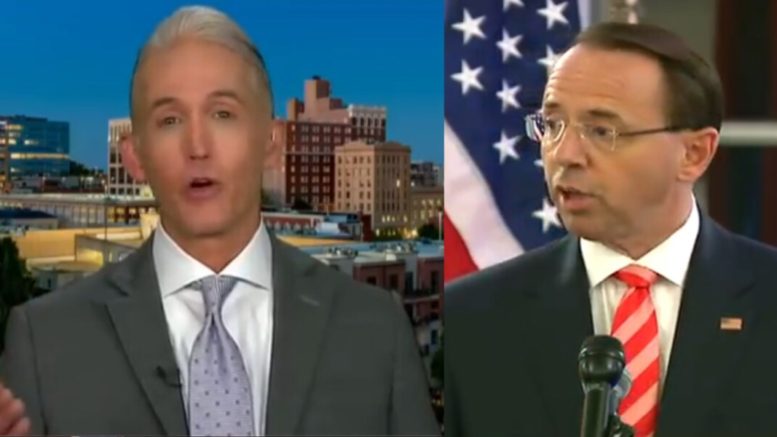 At an official Justice Department dinner in New York hosted by the Armenian Bar Association, Rosenstein spoke up defending his handling of the special counsel’s investigation.

While speaking about the Mueller report, Rosenstein said, “I did pledge to do it right and take it to the appropriate conclusion. I did not promise to report all results to the public because grand jury investigations are ex parte proceedings.”

“It is not our job to render conclusive factual findings,” he continued. “We just decide whether it is appropriate to file criminal charges.”

(Related: Rosenstein Takes A Jab At Obama’s DOJ, Huckabee Reacts: ‘It Was A Soft Way Of Him Saying There Was A Cover-Up’)

Rosenstein reportedly argued for a less transparent version of the Mueller report, one that exposes less of the findings of the investigation, however, Attorney General William Barr opted for a more public reading. (Continued Below)

Trey Gowdy weighed in and began by saying that there were days that he agreed and disagreed with Rosenstein, but explained where the Deputy Attorney General is right.

“The purpose of the justice system is not transparency; it is fairness. Sometimes transparency and fairness overlap, but often times they do not. Fairness is the objective of their Department of Justice. And I think Rod is right. This report should not have been made public, certainly not to the extent that it was.” Gowdy said.

He added, “But, the politics won out of the precepts of the Department of Justice.” (Continued Below)

Gowdy said of Rosenstein that he essentially followed by the book and also didn’t sabotage the President.

“He didn’t think the [Mueller] report should have been made public because we don’t publish derogatory information on people that we don’t indict. So, despite the fact that he disagreed with what AG Barr was gonna do, he helped land the plane.” He explained.

“We’re in an environment where if we disagree with a decision you make, therefore you must be corrupt, ” Gowdy said of critics who are disagreeing with Rosenstein’s remarks.

(Related: Nadler Subpoenas The Full Mueller Report, Gowdy Responds: ‘He knows It’s Against The Law For Barr To Share [It] With Him’)