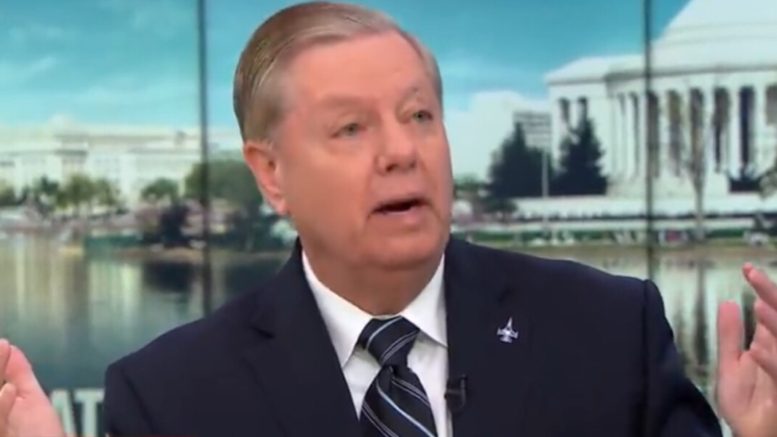 Chairman of the Senate Judiciary Committee, Lindsey Graham (R-SC), interviewed with host Margaret Brennan on CBS’ “Face the Nation” Sunday where he weighed in on the aftermath of the Mueller report, Don McGahn, and impeachment.

This comes as Attorney General Barr will be testifying before the House and Senate Judiciary Committees Wednesday and Thursday of this week.

Sen. Lindsey Graham touched on the upcoming hearing of the Attorney General, who will be testifying about the Mueller report.

“I think the idea that this President obstructed justice is absurd. He turned over a million documents to the Special Counsel. Almost everyone around him testified. I can’t think of one thing that President Trump did to stop Mueller from doing this job,” Graham said. “He never claimed executive privilege.”

“From my point of view, I’ve heard all I really need to know. Now I want to look at and find out how all of this happened,” Graham added.

Asked about Don McGahn, Sen. Graham responded, “I think it’s all theater, it doesn’t matter. I don’t care what [Trump] said to Don McGahn, it’s what he did. The President never obstructed.” (Continued Below)

Graham continued as he was pressed about McGahn and obstruction, “If you’re going to look at every President who pops off at his staff and you know, ask him to do something that’s maybe crazy, then we won’t have any Presidents.”

“He didn’t do anything. The point is the President did not impede Mueller from doing his investigation. I don’t care what happened between him and Don McGahn. Here’s what I care about: was Mueller allowed to do his job? And the answer is, yes. Name one thing they did to stop Mueller from doing his job. If you can’t, then there’s no obstruction.” He said bluntly. (Continued Below)

Asked if he will call McGahn to testify, Graham replied, “No, I’m done.” He added of Mueller testifying, “I’m not going to relitigate it. I don’t know how clear I can be, Margaret. It’s over for me! He didn’t collude with the Russians, obstruction of justice in this situation is absurd.” [Emphasized]

On the subject of impeachment, Margaret continued to press about Don McGahn, but the South Carolina Senator shot back in defense of President Trump and said that he, unlike former President Bill Clinton, did “nothing wrong” that would warrant his impeachment and removal from office.

“What President Clinton did was interfere in a lawsuit against him by Paula Jones and others, hide the evidence, encouraged people to lie. So, to me, he took the legal system and turned it upside down. But it doesn’t have to technically be a crime. What President Trump did here was completely cooperate in an investigation, a million documents, let everybody that the special counsel wanted to talk to be interviewed.”

“I believe the President did nothing wrong. Whether you like him or not, I’ll leave that up to you,” he added. (Video Below)

Graham indicated the scenarios are different, daring House Democrats to impeach Mr. Trump if they believe he committed high crimes and misdemeanors.

“So here’s the deal for me: You actually have to do something. Bill Clinton lost his law license for five years because he did something,” he said. “But to my Democratic friends, if you agree with the 1999 statement I made, [and] you think this office needs to be cleansed, impeach him. It’s up to you.”