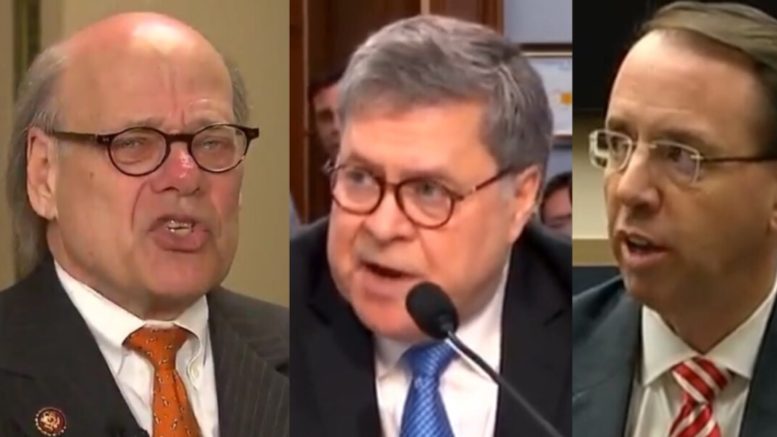 “The Attorney General agreed to appear before Congress. Therefore, members of Congress should be the ones doing the questioning,” Kerri Kupec, a Justice Department spokeswoman, said in a statement Sunday. “He remains happy to engage with members on their questions regarding the Mueller report.”

Rep. Jerry Nadler (D-NY) wants to give the committees’ attorneys a chance to question Barr saying that “It’s not up to Barr to dictate the terms of the hearing” and suggested that the Attorney General is “afraid of something.”

Anti-Trumper Steve Cohen also took a shot at William Barr where he called him a “chicken” and suggested that “he’s not worthy of being the Attorney General.” (Continued Below)

“If he’s that unsure of himself and unsure of his ability to parry the questions, then he does not deserve to be Attorney General. It shows how loose of a foundation he had to make the statements that he did about the Mueller report.” He added.

Further, he weighed in on Rosenstein’s resignation where he claimed that the Deputy Attorney General did President Trump’s dirty work. (Continued Below)

Rosenstein submitted his resignation on Monday to President Trump, effective May 11.

In his resignation letter, Rosenstein thanked President Trump “for the opportunity to serve; for the courtesy and humor you often display in our personal conversations; and for the goals you set in your inaugural address: patriotism, unity, safety, education, and prosperity, because ‘a nation exists to serve its citizens.'”

Rosenstein discussed the Mueller report over the weekend and reportedly explained that the Russians had very little impact on social media.

Rep. Cohen claimed that the Russians spent “millions” of dollars to influence Donald Trump’s election and Wolf Blitzer allowed the Tennesee congressman to peddle that lie publicly on air. Facebook testified before lawmakers and the company said that Russian agents only spent up to $100,000 on ads.

“Trump is so insecure about his own election victory, he didn’t win the popular vote that he refuses to let anybody suggest that his presidency is not a legitimate presidency, and the Russians helped him get elected. The fact is they did, the facts will prove it and show it– social media influenced. The Russians had an effect on people, you can’t demonstrate that with numbers, but you know it did. That type of millions of dollars worth of social media influences people, especially when it was targeted the way it was.” Cohen whined.

Afterward, Cohen suggested that “Rosenstein is not to be commended, he’s to be condemned for doing what Trump wanted him to do –his dirty work to cover up the real reason for firing James Comey.” (Video Below)

"If this attorney general is chicken to face the House Judiciary Committee, he's not worthy of being a United States attorney general," says Rep. Steve Cohen. "It shows how loose of a foundation he had to make the statements that he did about the Mueller report." pic.twitter.com/PwTZCambDs

"Rosenstein is not to be commended, he's to be condemned for doing what Trump wanted, to do his dirty work to cover up the real reason for firing James Comey" – Rep. Steve Cohen reacts to the news that Deputy Attorney General Rod Rosenstein submitted his resignation. pic.twitter.com/o0hTSOvswo